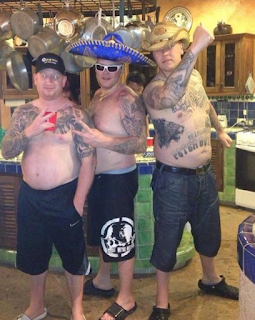 Mytowntoday is reporting that "A massive drug bust in Whitecourt has lead to the arrest of nine individuals." Cory Higdon is facing three counts of trafficking crystal meth while Daniel Brennan, James Stevens, Matthew Horning, Joel Wenger, Sasha Stimson, Randy Duperron (Stratton) and Anthony Courtney have all been charged with trafficking cocaine. Stephen Alley faces one count of possession of cocaine for the purposes of trafficking. He plead guilty in January to multiple counts of possession for the purposes of trafficking.

As we know, the drug trafficking in Whitecourt has been predominately controlled by the Whiteboy posse who sell drugs for the Edmonton Hells Angels. It appears that Mark Horning's brother Matthew Dean Horning has been arrested in this bust. Marks' going to be pissed. Let's hope he doesn't cap his own brother. In the top picture of the three amigos taken after 2012 Dean is in the middle. On Dean's left is "retired" WBP founder Sean Jackson. On his right is Travis Mourits.

Castanet is reporting that on Feb. 21, Osoyoos RCMP arrested Donald Bryce Lyons (Blaze's woman beating buddy) at his residence after his parole was revoked and a Canada wide warrant was issued for his arrest. I understand that Blake Adams who worked for Sean Jackson in Whitecourt is in Kelowna now. With Don Lyons in Osoyoos does that mean they're going to put Fat Mike in Kelowna to pick up the business? Dominic Dipalma Jr was in Kelowna before he was busted in Calgary. HA puppets - different name same pile.

Posted by Dennis Watson at 1:52 AM