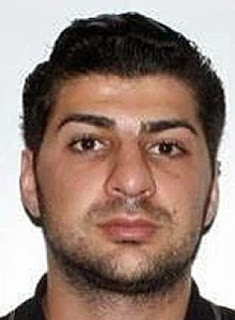 The Vancouver Province is reporting that Hells Angels associate Rabih Alkhalil from surrey was in court for the murder of Johnnie Raposo in Toronto. Police claimed Raposo was the leader of the McCormick Boys, a small west-end Portugese gang that bought drugs from Italian organized crime. Nic Nero, another Hells Angels associate is Rabih Alkhalil's co accused in that murder. Nic Nero became a cocaine trafficking kingpin in Niagra where his co accused Rabih Alkhalil also has outstanding drug charges. Rabih is more known for his drug bust in Montreal with Larry Amero.

Larry Amero and Jonathon Bacon attended Rabih's brother Nabil's wedding in Ottawa before they were shot in Kelowna. Nabil Alkalil was caught with 11 kilograms of cocaine in Ottawa back in 2008 and served a seven year sentence. As the Vancouver Province pointed out, the Alkalil's associations with the Hells angels go back to the Loft Six shooting where Rabih's other brother Mahmoud Alkhalil was shot dead by Hells Angels rivals. As the Vancouver Province also pointed out, Rabih Alkhalil has been charged in the Wall Centre shooting for killing a Hells Angels rival.