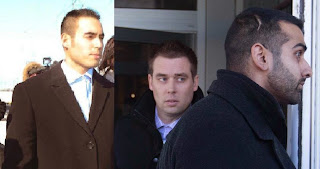 In contrast this one is somewhat more disturbing. Three Toronto police officers have been charged with gang raping a female officer. The Toronto Sun is reporting that the three police officers, Joshua Cabero, Leslie Nyznik and Sameer Kara were swiftly freed on $15,000 bail

Rape is a heinous crime all on it's own. Gang rape is deranged. Yet three police officers gang raping a fellow officer is a colossal betrayal of trust. Sexual harassment is a huge problem within the RCMP that they refuse to address. That's why they are facing a class action lawsuit about it. As EAF has mentioned over 300 female officers are part of a class action lawsuit alleging sexual harassment in their workplace. That is huge. 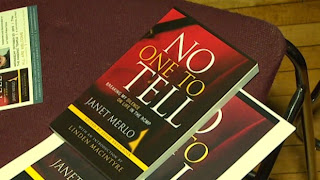 I was under the impression that Catherine Galliford was leading that class action but I understand that is not true it is Janet Merlo who is leading it. Catherine Galliford's case is entirely separate. Catherine was the public face for the RCMP in the media during the Pickton case and Air India. I have no idea why they don't settle that one. I understand she is willing to agree to a gag order. If they don't settle there will be no gag order. It is clear they want to drag it on and punish her by burning tax dollars to cover their criminal negligence.

Janet Merlo wrote a book about her experiences called No One to Tell: Breaking My Silence on Life in the RCMP. The Globe and Mail reported that Janet paints a picture of near daily harassment. Some of the allegations are just stupid innuendos that are obviously not appropriate in any work force not to mention the RCMP. In any other industry the company would deal with it to fulfill their legal obligation instead of sweep it under the carpet and not only tolerate the inappropriate behavior but actually promote people who are intrenched in it.

Yet some of the allegations are much more serious and include actual rape. During the Winter Olympics in Vancouver members of the RCMP were accused of smuggling a stripper in a hockey duffel bag onto a cruise ship for security personal. During that drunken party a police officer was accused of raping a female coworker. That story was buried because whistle blowers are afraid of retaliation since they get slandered and attacked for reporting criminal activity. Not all the allegations are unproven. Don Ray was convicted and sent to Surrey. The fact that he is still employed with the RCMP is proof they refuse to recognize their legal obligation to remove sexual harassment from the workplace. Any other industry he would have been fired.