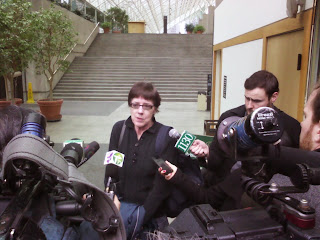 Note: It appears that the discrepancy in the dates on the CSO data base can be simply explained. It appears those are the estimated dates the alleged offenses took place not the arrest dates. My bad. Nevertheless, this case is dripping with contradictions and entrapment. There is no means or motive for the crime.

The Surrey Pressure cooker fraud trial has begun. That's the one that involved the exploitation and entrapment of John Nuttall and Amanda Korody. Yes I was there. Went for lunch with John's mother and Grandmother. I have a lot to say about this case. The jury was present so what was said in court today is publishable.

C-4?! Where the f*ck do you think they're going to get C-4 from? The police agent said don't worry about the explosives, leave that up to me. Yeah right. Just like they did for Air India. This case is very upsetting. It's upsetting because the thought of murdering innocent people is horrific. Yet so is setting someone up for that false attack to justify losing a billion dollars from your budget every year. I have a lot more to say on this case but need time to calm down first.

OK here goes. The Nuttall trial is being held in courtroom 20 off the Nelson street entrance of the Vancouver court house. However, I don’t think the jury will reconvene until next week. I was sitting in the courtroom and I saw someone enter. I think to myself, who’s that? Is that the accused? Then he steps into the dock for the accused and some in the crowd gasped. Is that him they asked? He looks good. Clean cut, healthy. Doesn’t look like a terrorist does he.

Amanda entered with her head covered and the same person gasped as though she was wearing a pentagram. I found the sensationalism irritating. This was coming from the court artist that made that ridiculous painting of them before trying to disfigure their appearance to make them look like crazed terrorists. Her rendition of John today reflected short hair but it was not accurate. He looked good. He looked innocent.

One of the first questions John’s friends asked was how were they supposed to go to Victoria to plant bombs then get arrested in Abbotsford when they didn’t own a car or have a pot to piss in. They couldn’t even afford the ticket for the ferry ride. Well the answer is simple. The police agent drove them and told them exactly what to do.

Why did they do what the police agent told them to do? Because they were afraid for their lives. John’s mother repeatedly said that they were afraid a terrorist organization was going to kill them. John’s 90 year old grandmother confirmed this claim separately on several occasions. His grandmother told me she lived with them in that basement suit. Some of the furniture was hers. That heirloom candy bowl was hers. She said she moved out because they were all afraid for their lives thinking some terrorist organization was going to kill them. They would keep the drapes drawn and hide. This case is a cross between and Mr. Big sting and outright entrapment.

I will admit the opening from the crown seemed shocking. It was completely out of character described by every conceivable witness who knew the couple. The crowns opening statement was full of contradictions. Amanda was very sick when they were arrested. She was throwing up every day. When they were arrested the police just said give her a bag or bucket to throw up in. the crown claimed that this was not a suicide bombing. They were supposed to live and get away. Yet the crown claims John said his wife was sick and wanted to die a martyr. That claim made no sense whatsoever. When John converted to Islam he told his mother he could never kill anyone. The crown’s own evidence admits that John said the idea of killing people repulsed him yet they claim to have wire tap evidence of him making outrageous statements like wanting to fill the pressure cooker with nails to harms as many people as possible.

The root of these contradictions is clear. In a Mr. Big sting the police pretend to be some big criminal organization and ask the suspect to confess to a previous criminal act. Recently the courts have ruled these are inadmissible or at least examined with greater scrutiny. I personally always questioned the practice because there’s nothing preventing a suspect from making up some crazy story just to impress what they think is a criminal leader. In this case they were afraid some terrorists were going to kill them if they didn’t do what they were told so they started saying crazy things to impress Mr. Big so he wouldn’t kill them.

The personal wiretap between Amanda and John Global showed today confirmed this. In that wiretap John said to Amanda, don’t screw this up baby. This guy will go from Mr. Nice guy to Mr. Monster in a hurry. We are expendable. They were afraid the police agents were going to kill them if they didn’t do exactly as they were told. This goes way beyond entrapment.

In opening statements the crown claimed that the RCMP agents took them shopping to buy pressure cookers and nails. They were put in the police agent’s car and taken to another police agent who put fake C-4 in it. He put putty in it and some real C-4. So the crown claims. The police agent took it to Victoria over the ferry June 30th.

At no time were they in possession of the fake explosives. The pressure cookers they had they put food in because they had no idea how to make bombs out of them. The police agent told him where to download instructions on how to make pressure cooker bombs. That is why he had the plans but he was not capable of following those plans. One investigator who said they should give up on the investigation because he said these two weren’t capable of organizing a bag lunch let alone a terrorist activity. John had been on the methadone program for years.

The police agents took them to Squamish and tried to pressure them and said you really need to come up with a plan now. All he did was play video games. The same thing happened in Kelowna. The crown claims he made a video accepting responsibility for the bombing. Yet it was made under duress because they were afraid for their lives. In the video clip on Global the lawyer for the prosecution said the public doesn’t need to be concerned about this case. Yes they do. It’s being used to throw away civil liberty for all of us. It’s being used to rationalize losing a billion tax dollars every year from their budget. Losing that much money every year is organized crime. I’ll admit the lawyer for the prosecution is good at what he does. However, to me he just seems inherently dishonest. 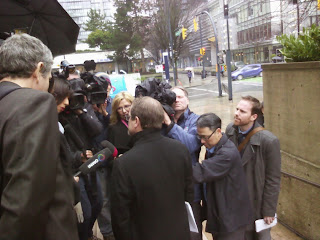