North Korea in The Interview: Fact vs Fiction 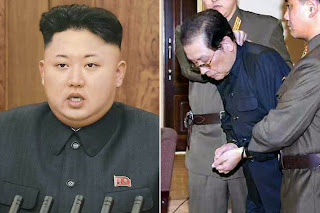 CNBC is reporting that North Korea launched five test missiles into the ocean today in another defiant war game. Coincidentally I just watched The Interview on Netficks. My daughter recommended it and said it was quite funny. It starts off like a bizarre Will Ferrell comedy, then turns Austin Powers spy movie and ends with a warm fuzzy moral message. It's pretty good.

Although I am somewhat skeptical of the Sonny hack we need to realize that this movie is A) fiction and B) a comedy. In real life, the dictator of North Korea is nothing to joke about. Obviously he's going to be human and have some likeable qualities which was portrayed quite well in the beginning of the movie. Two guys are sent to North Korea to assassinate their leader and one guy starts to like him and pulls out of the operation.

I don't know about starving his people although no doubt the prison camps are pretty nasty. All torture is wrong. It is wrong when North Korea does it and it is wrong when the CIA does it.

I do know in real life they hold public executions and he executed his uncle's entire family. Not to mention threatens to nuke the United States. That threat is very real. The only thing holding him back from fulfilling that threat is the fact that he doesn’t have the technical ability. Stephen Harper arming that crazed dictator is an insane crime of this age of treason.

China claiming they are denouncing North Korea’s missile tests and threats is absurd and fails the test of believability completely. They are the ones that supply North Korea with it’s military technology. Communist China was behind the Korean War. Canada selling Communist China nuclear reactors gives them the technology and the materials to make and export nuclear weapons to North Korea, ISIS and any other terrorist organization on the planet. That’s all there is to it. Stephen Harper is on the wrong side.

I cannot speak with any authority on what life in North Korea is really like because I've never been there. The best way to find out the truth is to go there and visit it yourself. With my political beliefs that would indeed be problematic. If people choose to live in a socialist system that's there choice. I don't have a problem with it. For me the key word is choice. North Korea calling itself the Democratic People's Republic of Korea is absurd. It is not a free republic and there is nothing democratic about it. They are no free elections. There is no free speech. There is no lawful assembly.

I do not believe anyone one in North Korea believes their fat little boy leader is a god. I think that was a fictitious myth the movie The Interview created as a joke. Seemingly there was a huge famine in North Korea in the late /90's where millions of people died. That was indeed tragic. I do not believe the leader of North Korea intentionally starves it's population. Prisoners and dissidents perhaps but not the general population. Yet some activists who have left North Korea claim there are still shortages of food. In all fairness we need to ask how much of that is because of their socialist system and how much of that is because of foreign sanctions. Likely it's a little of both. If someone chooses to live under a socialist system that is no reason to sabotage their system to try and make them suffer. If they invade another country or threaten to nuke yours then yes that is grounds for economic sanctions. Yet why would we put North Korea and Cuba under economic sanctions and not China? That baffles me.

The West putting Russia under economic sanctions over their claim to the Russian portion of the Ukraine is insane. Russia is no longer Communist but China is. Trying to destroy Russia's economic prosperity while we kiss China's ass gives the appearance that were are trying to destroy democracy in Russia and force them back to Communism. 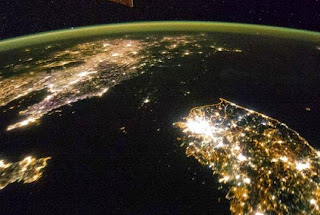 One of the most dramatic and indisputable images of North Korea is the satellite picture at night. Compared to the rest of the world at night North Korea is pretty much in darkness which pretty much says it all. An editorial in the state run newspaper responded by saying "They clap their hands and get loud over a satellite picture of our city with not much light, but the essence of society is not on flashy lights." Very true. The essence of society is not flashy lights. The greed and materialism in our society are concerns that we face. The government of China has an even worse problem with that than we do.

Yet the satellite picture does show how technologically backward North Korea still is. They are literally still living in the dark ages. Which reinstills the claim that the only reason they haven't followed up on their threat to nuke the United States is because they don't have the technology or the materials to do so. Which once again raises the question why on earth would Stephen Harper help them gain the technology and the materials to make and use nuclear weapons by supplying China. Treason is the only adjective to describe it.