Silenced: The War on Whistleblowers 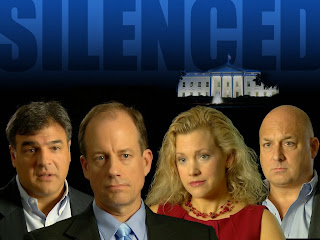 Tonight on CBC the Passionate Eye ran a profound documentary called Silenced: The War on Whistleblowers with Thomas Andrew Drake, Jesselyn Raddack and James Spione. Three real life patriots. Oath keepers who sacrificed greatly to keep their oath to preserve and protect the Constitution from all enemies both foreign and domestic. Oath Keepers arise.

We need to discuss the contents of the documentary. It talks about leaking sensitive information as opposed to reporting illegal activity. Putting someone in prison for reporting illegal activity is absurd. It shows how far the pendulum has swung after 9/11. 10 years before 9/11 none of this would have been imaginable. Now it is all the norm and it is wrong. The Constitution hangs by a thread. These cases remind me of the Sibel Edmonds and the Susan Lindauer stories.

The primary focus of the documentary is the pattern of treason that keeps repeating itself where a whistleblower is attacked not for leaking state secrets but for reporting illegal activity. I’m going to start a Patriot Hall of Fame to itemize the cases so we can examine them in context. Aside from Martin Luther King, the first modern patriot on that list is Gary Webb.

Since 9/11 has been the pivotal event that has decimated the free republic and thrown the Constitution out the window, we are forced to question 9/11 now more than ever and look at some of the huge inconsistencies in the insane claims that have justified this new war on civil liberty. Once again we need to examine the means and motive for that heinous crime. Who had the means of placing explosives on the load bearing beams ahead of time so that all three towers would collapse into their own blueprint at freefall speed just like a controlled demolition? Who had the motive for doing so? Everyone knows that killing innocent civilians in a terrorist attacks does not win over public support for your cause it has the exact opposite effect. This motive was articulated very clearly in Operation Northwoods.

In the documentary Silenced: The War on Whistlebolowers, one of the CIA employees were told that 9/11 was a gift. From now on we are going to get all the money we want from congress and more. That provides a motive. The day before 9/11 Donald Rumsfeld made a public announcement that the Pentagon had lost 2.3 trillion tax dollars and can’t account for 25% of what they spend. That much lost money is organized crime. After 9/11 that theft continued at an unprecedented level creating a massive debt that threatens our civil liberty more than any other foreign enemy throughout history.