Body found after SUV set on fire in Abbotsford field 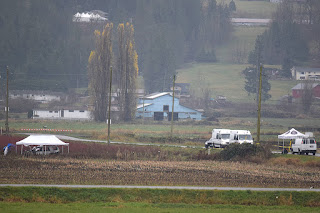 The Peace Arch News is reporting that "Shortly after 10:30 p.m., firefighters responded to reports of a vehicle on fire in the 5300 block of Bates Road, where the body was found inside after the flames were doused. The death is being treated as suspicious. Bates Road is blocked off between Townshipline and Harris roads. The location is on a secluded section of the road between large farm properties – an area that has been home to criminal activity before."

"The body of 24-year-old Alexander Blanarou was found dead of a gunshot wound in the field adjacent to the same section of Bates Road in December of 2017. Close to 30 containers of suspected drug-lab material were found dumped in the same area in April, 2015."

Update: Global is reporting that "Homicide investigators have identified the owner of a vehicle found burning in an Abbotsford field with a body inside last weekend. However, the Integrated Homicide Investigation Team (IHIT) says it's still not clear if Sukhdev Dhaliwal is the victim of what appears to be a suspicious murder." CTV is clarifying that Sukhdev Dhaliwal was the last person to rent the vehicle.