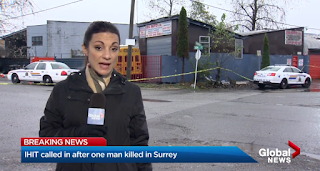 Global is reporting that "Surrey RCMP were called to 124 Street and Old Yale Road in Surrey on Monday night. They found a man suffering from critical injuries and the victim later died on the scene." The Peace Arch News is reporting that Police have identified the Surrey homicide victim as 30-year-old Andrew Baldwin. Three weeks earlier, his brother 27-year-old Keith Matthew Baldwin was shot in downtown Chilliwack. He died later in hospital.

October 8 2019 Andrew James Baldwin was in Surrey Provincial court for a stay of proceedings on possession for the purpose of trafficking charges from October 2015. November 13th 2019 (Yesterday) he was scheduled to appear in Surrey Provincial court for more drug charges from November 2015 which resulted in a stay of proceedings I assume because he's now dead. Keith Baldwin has a criminal record for robbery and theft.

The Vancouver Sun is reporting that the fatality in Surrey November 11th was from a shooting.