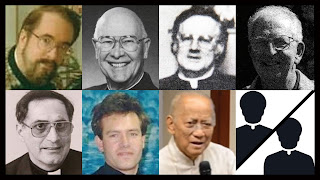 CBC is reporting that "The Catholic Archdiocese of Vancouver has named nine clergymen who have criminal convictions or lawsuits settled against them related to cases of sexual abuse dating back to the 1950s. In a report published Friday morning, the diocese revealed the results of a months-long investigation into cases of sexual abuse by its clergy, but says it can't name all the accused because of privacy laws." City News posted a picture of those named.

"For those occasions when we failed to protect you or when we were more concerned with the Church's reputation than with your suffering, I am truly sorry and ask for your forgiveness as I strive to make amends and bind your wounds." Wow.

"CBC's The Fifth Estate has reported that this is the first of Canada's 60 Latin Rite archdioceses and dioceses to make information about convicted priests public. Clergy who were criminally convicted: Paul J. Blancard, George Gordon, John McCann, OMI Harold McIntee, OMI Alfred Frank Louis Sasso, Clergy with lawsuits settled: Lawrence Edward (Damian) Cooper, Antero Sarmiento. Clergy named in other public cases: Edwin Budiman, John Eason. Some of the charges against the men date back to the 1950s and involve child victims as young as six or seven."

"McIntee, who worked in parishes in Ucluelet and Tofino, in the Diocese of Victoria, was charged with multiple counts of sexual abuse in 1989. He served two years in jail for abusing 17 boys in British Columbia over 25 years. Many of his victims were boys in residential schools in Kamloops, Prince George, and Victoria."

"McCann was convicted in 1991 of six counts of sex abuse of girls under 16 in the 1970s when he was serving at St. Augustine's Parish and St. Peter's in New Westminster. After serving 10 months in jail, he served as a priest in the Diocese of Victoria and the Archdiocese of Ottawa."