Thrilla at the Villa 2: Pro Boxing in BC 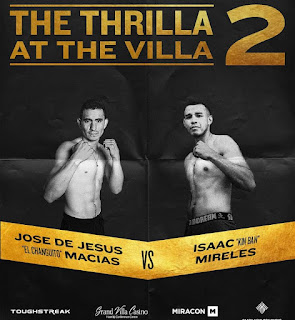 BC just had it's second professional boxing card at the Villa Casino in Burnaby right beside the Trans Canada freeway. It was a huge success. I must say these Mexican boxers are sure raising the bar for BC boxing. What a welcome addition to the industry. It was hosted by Alliance Boxing Promotions which consists of Daniel Norman and Ray Savard from Savard Boxing Club in Surrey.

The main event was eight rounds with Jose de Jesus “El Changuito” Macias and Isaac “Kin Ban” Mireles both from Mexico. Kin Ban was flawless and El Changuito was tough as nails. Kin Ban kept rocking El Changuito with solid body shots and head shots but El Changuito did not flinch and kept coming back over and over again. He is very tough.

Former Super Middleweight Champion JY Kim from Surrey took on Salvador Zavala from Mexico. Jy Kim was very strong and very competent but Salvador Zavala was flawless. It's impressive to see the technical precision of Mexicano boxing. Kin Ban had a big name in his corner.

Buneet Bisla is a Surrey Kickboxer from Bisla Martial Arts gone pro boxing. Like Josh Jauncey at WKX, the Bislas are a local father and son combination. Buneet was very smooth, very competent and very consistent. We'll be seeing a lot more of him in the future. Surrey pride yo. 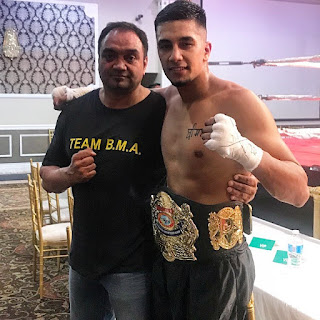 Update: I guess I had it backwards. Jose de Jesus Macias won the decision over Isaac Mireles. I'm a bit confused about that. At the end of the fight the announcer said blue won the fight but they raised red's hand. I guess the winner raised the losers hand because he fought so well. From what I saw red was flawless and blue was tough as nails. That's what I saw.