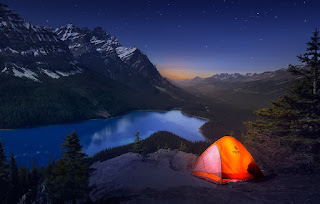 With rising rents and skyrocketing land prices, homelessness is still an ongoing concern and it is completely separate from addiction. People living out of their cars or RVs are not a threat to social order or world peace. These tent city toilets full of addiction and lawlessness are.

This week in the morning on my way to work I noticed a light in a tent in the forest just off the freeway exit a few days in a row. This person is not a threat to anyone. It is however freaking cold to be staying overnight in a tent right now.

I supported the Woodwards squat but I don't support the tent camp at Oppenheimer Park. Aside from promoting addiction and rape, the camp at Oppenheimer Park is part of the problem not part of the solution. Many years ago when Doug McCallum was mayor, I was opposed to council's attempt to shut down the Front Room, a homeless shelter in Whalley. Then I saw what it became and realized I was on the wrong side. The Front room was a drug house full of brutal exploitation.

When Linda Hepner and the Surrey RCMP shut down the addiction camp outside the Front Room on the Whalley Strip I was in complete support. People need homes not drugs. The BC NDP provided modular housing and the residents were told to go into housing or leave. That was fair and in everyone's best interest.

At that time, there were anti poverty groups trying to oppose the move. Consequently their arterial motives were revealed. Up until that time they pretended to be activists for social housing but when the government offered them housing and they refused, their real agenda became clear.

These weren't anti poverty activists. These were Anarchists and Communists promoting lawlessness. They wanted a place where they could smoke crack and crystal meth in public and say f*ck the Police. They opposed law and order. I do not. I am not an anarchist. Promoting addiction is in no one's best interest. Treatment saved Kati not lethal injection sites.

The Portugal model implemented mandatory treatment. If you want to talk about the Portugal model, talk about that. The problem with the new modular housing is that they have become drug houses just like the Lookout and the Font Room which are all supplied by the Hells Angels. People who don't do drugs are ostracized and bullied until they leave. This needs to change.

Zoning for rental units is a step forward for everyone. Just because they are rental units doesn't mean they have to become drug houses and cease pools of lawlessness. We need to maintain law and order. That is in everyone's best interest. Tenants can get evicted for breaking the law.

The Metro Vancouver Housing Corporation is a good idea. Unfortunately its administration has become corrupt and needs to be fixed. That would be in everyone's best interest.