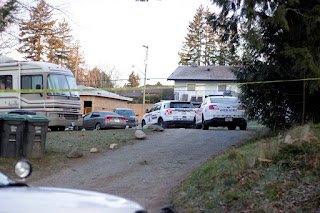 The Peace Arch News is reporting that "Surrey RCMP responded to reports of shots fired at aNewton home late Friday (Nov. 29). Staff Sergeant Duane Honeyman said police were called to a home in the 5500-block of Bakerview Drive just before midnight."

"When officers arrive, Honeyman said, they did locate some evidence to suggest shots had been fire in that area. Honeyman said a huge number of people were identified at the time, but no one has been arrested as of Saturday morning. (Nov. 30). He said there were no injuries reported to police. At this point, Honeyman said, there is nothing to indicate the incident is related to the ongoing Lower Mainland drug and gang conflict. But he added the incident is still under investigation." Shots fired in Surrey but it's not related to the gang conflict. WTF?

30 kilos of cocaine seized but it's not related to the gang conflict. Sounds like someone has been breaking into the evidence locker again. The Peace Arch News has posted an interactive map of the recent shootings in Surrey. Nothing to see here folks. Much. 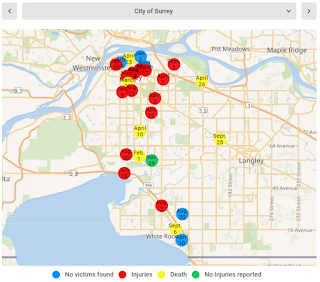 Update: Global is reporting that 30 have been arrested after shots fired at a house party. OK that might not be gang related but if he's carry a gun to a house party he is likely a drug dealer and gang affiliated. Non gang members don't take guns to house parties.