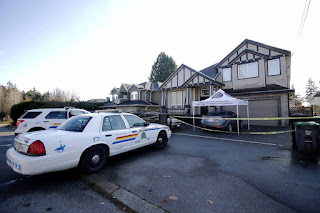 The Peace Arch News is reporting that "Surrey RCMP say a man was injured in a targeted shooting Thursday night. It happened around 9 p.m. on Nov. 21 near 146th Street and 83rd Avenue, not far from Enver Creek Secondary. Police responded to the scene after gunfire was reported. Officers arrived to find a vehicle that had crashed into a fence and a man inside with an apparent gunshot wound. He was taken to hospital but is expected to survive."

The Surrey Now Leader is reporting that "Police say two people have been found dead in a house in Whalley, and one of them is believed to be a homicide victim." That would imply a murder suicide. Not related to the shooting at Enver Creek.

Global is reporting that "Homicide investigators have identified the owner of a vehicle found burning in an Abbotsford field with a body inside last weekend. However, the Integrated Homicide Investigation Team (IHIT) says it's still not clear if Sukhdev Dhaliwal is the victim of what appears to be a suspicious murder."

CTV is clarifying that Sukhdev Dhaliwal was the last person to rent the vehicle.