US Sovereignty under attack by the WTO 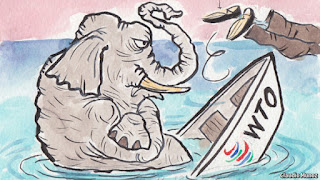 Bloomberg is reporting that "China secured the World Trade Organization’s go-ahead to impose $3.6 billion in sanctions against the U.S., in a case that predates the tariff war between the world’s two largest economies but may add a layer of tension to ongoing talks. The damages awarded, in a document released Friday on the Geneva-based organizations’ website, are the third highest in WTO history. The amount is about half of what was requested by China, which argued that some U.S. anti-dumping rules were illegal." AYFKM?

"The ruling also comes as the U.S. is mounting an assault on the WTO’s dispute resolution system, with the current terms of two of the final three judges on its appellate body due to expire in December and Washington blocking new appointments. The Trump administration is likely to cite the case as an example of what it sees as the overreach of the WTO’S dispute system."

An anti-dumping duty is a protectionist tariff that a domestic government imposes on foreign imports that it believes are priced below fair market value. Dumping is a process where a company exports a product at a price lower than the price it normally charges in its own home market. For protection, many countries impose stiff duties on products they believe are being dumped in their national market, undercutting local businesses and markets.

In the United States, the International Trade Commission (ITC), an independent government agency, imposes anti-dumping duties based upon investigations and recommendations from the Department of Commerce. Duties often exceed 100% of the value of the goods. They come into play when a foreign company is selling an item significantly below the price at which it is being produced. Part of the logic behind anti-dumping duties is to save domestic jobs. F*ck the WTO.

Hey Ho, NAFTA Chapter 11 compensation awards has to go. The elephant is in the room. 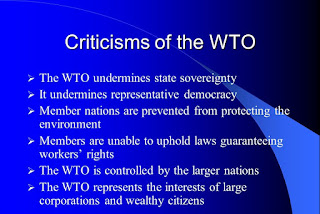