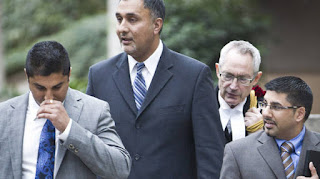 "Udhe Singh (Dave) Basi was an aide to then finance minister Gary Collins and Bobby Singh Virk was an assistant to then transportation minister Judith Reid. Both men were sentenced to two years less a day under house arrest for breach of trust and accepting a benefit. Aneal Basi, cousin of Dave Basi and a low-level communications officer in the Transportation Ministry, was charged with two counts of money laundering for allegedly handling payments to Dave Basi, but charges were later stayed." They cut a deal and the RCMP's contract was renewed.

Well the CSO is reporting that Jasmohan Singh Bains will be in Victoria court November 29th for a Review of Sentence. He was found guilty September 11th 2008. The Globe and Mail reported that John Scallon and Michael Doyle were charged with conspiracy to traffic cocaine. While Jasmohan Bains, Brahm Mikol, Blythe Vernon and Mr. Scallon were charged with one count of conspiracy to traffic cocaine. Their sentence will also be reviewed November 29th.

30 years for cocaine trafficking is excessive especially when the ring leaders got off Scott free.