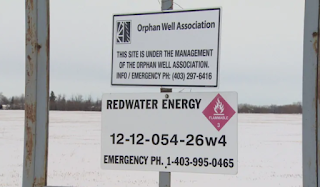 CBC is reporting that "Another Alberta oil and gas company has closed its doors, leaving more than $80 million in estimated costs to cleanup its remaining wells, pipelines and facilities. Calgary-based Houston Oil & Gas told the Alberta Energy Regulator (AER) last month that it was ceasing operations and no longer has any employees, according to court documents. Houston entered receivership last week. The company is focused primarily in southeast Alberta and predominantly produces natural gas, according to its web site."

This is a reoccurring problem. Oil companies abandon a well and expect the tax payer to pay for clean up. Old, unproductive oil and gas wells could cost up to $70B to clean up 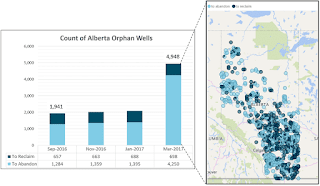