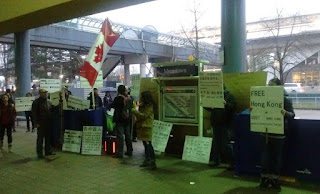 There were some Hong Kong supporters rallying at Metrotown today. Members of the Vancouver Society in Support of Democratic Movement were there and have an informative website covering past and future events. The literature they were handing out states This is not an independence movement. Hong Kong is defending its basic law. They are defending Hong Kong's Constitution which was created by the Sino-British Joint Declaration.

The BBC is reporting that "When Hong Kong was handed back to China on 1 July 1997, following more than 150 years of British control, the 'one country, two systems' principle was established as the foundation of the relationship. While Hong Kong is part of China, the policy has given the Special Administrative Region (SAR) a high degree of autonomy." 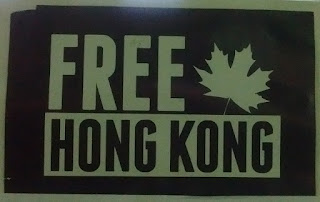 Dr Zheng Shuen is a murderer from mainland China. This doctor of death kills people so the Communist Party can make money from selling their organs. It is big business and it has nothing to do with criminal justice and everything to do with the execution of political prisoners and the complete destruction of civil liberty. This isn't just a movie. This is real life.

Hong Kong's concerns are valid. We need to support them. 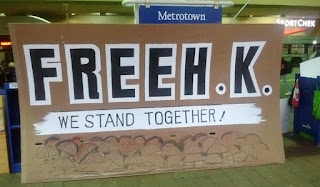