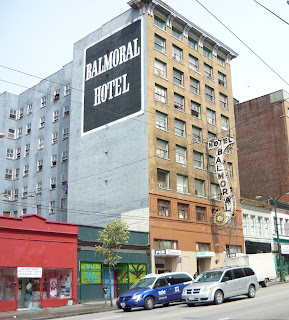 The Canadian Press is reporting that "City council has voted to seize control of two derelict hotels in Vancouver's Downtown Eastside after a lawyer for the property owners warned the municipality it is exposing itself to the risk of litigation by expropriating them for $1 each. Mayor Kennedy Stewart described council's unanimous decision on Wednesday to take over the Balmoral and Regent hotels as a historic vote. The expropriation 'is a clear message that we are not afraid to use every tool at our disposal to create new affordable homes,' he said in a statement."

Every tool at our disposal, including theft. Interesting. The Balmoral is a toilet. So is the Regent. I'm all for turning them into social housing. However, stealing them presents a double standard. Obviously the buildings themselves are worthless and have to be destroyed but the property has a huge value. Compare this with how the City bought the Drake hotel from the Hells Angels and paid them $2 million more than it was worth. Organized crime exploiting the disadvantaged.