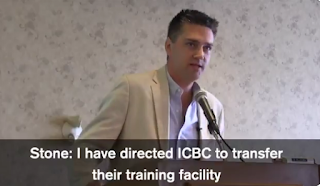 The Vancouver Sun is reporting that "The embattled Liberal who used to be responsible for the Insurance Corp. of B.C. says he spent years shooting down goofy reforms pitched by the corporation, and that NDP Attorney General David Eby is a sucker for falling for half-baked changes that have led to skyrocketing premiums for many drivers."

Selling the ICBC dot com domain to a bank in China with the same initials is not a big deal when ICBC could simply use ICBC.ca which it already owns and redirects to icbc.com. However, giving away ICBC assets to Liberal campaign contributors is a concern reminiscent of BC Rail.

The previous Liberal government was trying to give away ICBC buildings to lobbyists and Andrew Wilkinson said that was nonsense. It is nonsense but it did happen. In the video posted on Ravi Kahlon's twitter we can see Todd Stone offering an ICBC building to the Automobile Retailers Association. This is the Liberal corruption that made the New York Times. 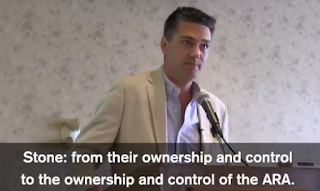 Giving away public assets to campaign contributors again. That's what triggered the Greek Financial Crisis. What was public money became private then disappeared.

Let us not forget the root of the ICBC fraud that the NDP is perpetuating with it's skyrocketing rates. ICBC was breaking even. The BC Liberals extracted a $1.3 billion dividend from ICBC to balance Christy Clark's fake fudgeit budget. If there was no dividend, there would be no deficit. Stop the Fraud. Pay back the dividend. It's as simple as that.