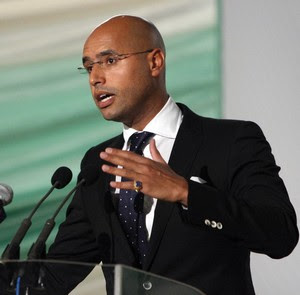 The funeral for Gadhafi's son and two grandchildren killed by a NATO missile strike was held Monday. Rebels said the claim that family members were killed was a publicity stunt by the flamboyant strongman. I guess not. A Yemeni official condemned the attack.

Despite denials from Western leaders that the air raid on the Gadhafi compound was an assassination attempt, it has provoked renewed debate on whether the British and French-led strikes are exceeding the United Nations' mandate to protect civilians. No kidding. Bombing one side is not enforcing a ceasefire. Neither is murdering children.

Rebel fighter Abdel-Aziz Bilhaj, 22, welcomed the attack, saying it would make Gadhafi think twice about how he dealt with his people. Rebels cheered and set off fireworks with the news. Can we not see how twisted this is? We have become animals thirsting for blood and hungering for war. They said it would one day come to this but it is very sad nevertheless.

The Libyan leader also had an adopted daughter who was killed in a 1986 U.S. airstrike on his Bab al-Aziziya residential compound, which was separate from the area struck on Saturday.