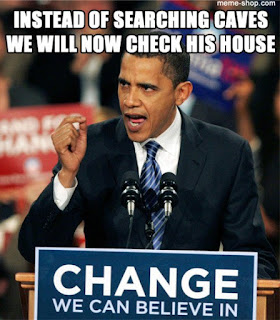 The Vancouver Province recently ran an article by Les MacPherson about how Bin Laden's death has fueled conspiracy theories. The first conspiracy theory he addresses is the thought that Osama is still alive. To that charge I'd have to agree with his claim that it would be highly unlikely for President Obama to risk the embarrassment of announcing Osama's death if he was still alive only to find a new video from a living Osama. I just don't think Osama had anything to do with 9/11.

The article states that posting pictures of a dead Osama wouldn't matter because Conspiracy theorists would only claim the photos are faked. The shadows aren't right, they would say, just like they say about the thousands of photos and miles of video footage of astronauts on the moon.

Yes photos can be easily faked and yes they can make pretty realistic masks of anyone. However, comparing that to claims of the moonwalk being faked is quite a stretch. After all the original bin Laden "confession" video didn't look anything like bin Laden. It wasn't a matter of the shadows not being right. It was simply a matter of being an entirely different person in the video.

"Conspiracy theorists, however, by definition, can never be convinced. They'll say bin Laden won't be appearing in any more videos because he's in on the conspiracy." Well that's a possibility. Everyone else in bin Laden's family were extremely cosy with the Bush family and donated millions to their political campaigns and oil fraud company. Osama was at one point a CIA asset.

Nevertheless, MacPherson goes on to state: "It is the malignant nature of a conspiracy theory that all evidence confirms the theory. If there is no evidence whatsoever, the theory concludes it is too perfect. That's why people still insist that 9/11 was an inside job, that Oswald didn't shoot JFK, that an alien UFO crashed near Roswell, N.M. No amount of evidence can ever put to rest these enduring myths."

This is where I start to gag. MacPherson uttered the forbidden thesis, that some think that 9/11 was an inside job and that no amount of evidence can ever put to rest these enduring myths. The video of the assassination of Kennedy clearly shows he was shot from the front not the rear as claimed in the Warren Commission report. UFO's don't concern me but 9/11 does.

The most outrageous conspiracy theory I have ever heard is the claim that the third tower in New York fell due to heat and fire. That is not scientific. It defies reason. No planes hit the third tower. Other buildings closer to the twin towers withstood the impact of falling debris. The third tower collapsed into it's own blueprint at free fall speed just like a controlled demolition. They knew it was going to collapse before it fell. Larry Silverstein said they pulled the building.

I could go into details about the numerous scientific flaws with the official story behind 9/11 and likely will. Yet the simple irony I find is why would Larry Silverstein buy the Twin Towers right after the Port Authority lost the court case to have the insurance companies pay for the asbestos removal they had been required to perform. Why would a businessman buy the twin towers knowing he had to pay for the removal of asbestos in the towers? That defies reason.

He sure profited from the disaster though. He sued the insurance company and claimed that since two planes hit the towers that constituted two terrorists attacks not one and demanded to be paid twice the maximum value of the insurance policy. He paid his mortgage and doubled the value of his investment as a result of the attack based on an insurance fraud.

Let's say I had a car worth $20,000 and I insured it for it's full value. Then let's say I get in a three car collision. Two cars run a red light and hit me from both sides. The fact that two cars hit me is not relevant. I had one car and I insured that car for it's full value. ICBC would not pay me twice the value of my car. Yet that is exactly what Larry Silverstien did. He insured the Twin Towers against a terrorist attack for the full value of the towers and was then paid out twice the value of the towers. That in my opinion is another example of insurance fraud. That's a fact, not a conspiracy theory.