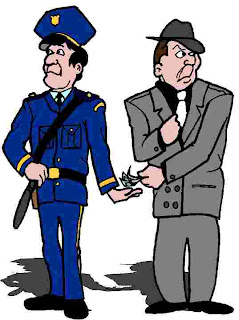 It gets weirder. The reason he got caught was because his wife was crossing the border and admitted to a customs agent she had former business dealings with an outlaw biker and admitted she still visits him in prison. I kid you not. US customs fond out her husband was an RCMP officer and they checked what kind of criminal database enquiries he made. Turns out he was looking at info about his wife and the Hells Angels.

Giving the guy the benefit of the doubt it's remotely possible he was checking his wife's criminal history. That is something I'd likely do myself since they just met in 2009. If she admitted to a customs agent she had previous business dealings with a Hells Angel then she must have admitted that to her husband as well.

The police and US customs would be in a better position to determine what kind of information he was looking at which would more likely answer the why but the flaming question is what is an RCMP officer doing married to a women who is a Hells Angels associate and currently visits a Hells Angel in prison. If that is not a flaming red flag, I don't know what is.

If her friend is in prison then it's most likely part of the Zig Zag Crew bust that was all drug related and involved Sean Wolfe among others. Saying that she had business dealings with drug dealers in the past and still visits a drug dealer in prison is somewhat concerning.

It's reminiscent of Ian Grant who was caught with confidential RCMP documents about the Hells angels and all of their rivals in his home. Ian Grant was from Manitoba. The article in the Sun goes a bit further to explain the officer claims he did the checks to protect himself and the force. Sharing the information with his wife could have been more like confronting her with her past.

There is a big difference between checking out if the women you just met and are going to marry has a criminal past compared to giving the Hells angels confidential information as was found in Ian Grant's home.

One would think that if he found 185 documents about his wife and the Hells Angels then that might be a bit of a red flag. Her continued friendship with a Hells Angel in prison certainly is.