Huntsville and the Vortex of Corruption 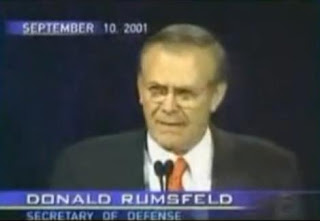 Huntsville, Alabama and beside it Redstone Arsenal is a large hub where military weapons are manufactured. Al Martin calls it Corruption City, USA. (page 362) Martin describes how an investigation team was sent in to Redstone with some accountants and found there was a great deal of missing material and no record of any payments to account for the losses. Martin claims the "discrepancy" at the Huntsville military complex was $16 billion.

Shocking as this allegation is, it clearly falls within the realm of believability when we hear the warnings from Donald Rumsfeld the day before 9/11. On that day he said the Pentagon was missing $2.3 trillion dollars. Trillion. That is a huge amount of money and as we all know where ever there is that kind of money to be made, criminals will kill for it.

Martin claims the heart of the scheme was to sell military weapons to embargoed countries through a variety of artifices and cut-out nations. We've already talked about Trans World Armaments of Montreal tied to Brian Mulroney which was used in Iran Contra to ship arms to Nicaragua.

It's kind of hard to rationalize how stealing from the military is somehow done for God and Country. One could, in a very twisted way, rationalize selling cocaine out of Mena Arkansas to help supply the Contras in Nicaragua with weapons with an end justifies the means argument. They could claim they are doing that bad thing to fight a greater evil, which is the threat of Godless Communism.

Yes it is very twisted and insane, yet there is a fragment of a rationalization one could theoretically cling to. Yet there is no fragment of rationalization to cling to when you are stealing arms from the military and selling it to embargoed countries to make a profit for yourself and line your own pocket with stolen cash. Stolen tax dollars. That act isn't even conflicted. It is outright theft.

Of course the criminals in charge say the answer is to privatize the military and remove all public accountability whatsoever so the public never again hears a number of how much money is missing from military spending. Thus Blackwater and the private Corporate Mercenary Army was created and the Clone Wars have begun.