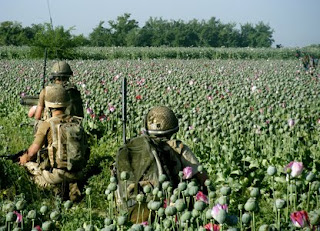 B.C. Coroners Service has warned that a bad batch of heroin on the streets of Vancouver is twice as potent as normal and has resulted in more than 20 heroin overdoses in the first four months of 2011, double that of a year earlier.

The question I have is where is this heroin coming from? If most of the world's heroin comes from Afghanistan, does that mean this extra potent heroin is coming from the opium fields the US soldiers are helping to cultivate and harvest? I think that is a very relevant question.

We are told that Afghanistan regains its Title as World's biggest Heroin Dealer. Afghanistan is still the source of almost all of the heroin sold in London. Well isn't that ironic?

The BBC reports that Afghanistan retook its place as the world's leading producer of heroin in 2002, after US-led forces overthrew the Taliban which had banned cultivation of opium poppies. The Americans tell us they have to cultivate the opium or the Taliban will, yet the Taliban banned opium when they were in power.

The head of Russia's Federal Service for Narcotics Control claims Heroin production in Afghanistan has grown by 40 times. Russia is asking NATO to stop cultivating opium in Afghanistan. Can you believe that?

Meanwhile back on the ranch, the conservatives are going to the Supreme Court to try and get Insite shut down. So which is it? Get paid to have the military profit from the production of opium in Afghanistan or get heroin off the streets? It's all so conflicted.

I have mixed feelings about Insite. Cleaning up the allies is a good thing. Preventing death is a good thing too. Yet giving alcoholics alcohol is not in their best interest.

The problem with needle exchanges and with insite is that as soon as you hand out free needles or have a safe injection site, drug dealers sell drugs outside. The police can't really arrest them for selling drugs when we are handing out free needles or providing safe injection sites. This is how a social program changes the democratic laws in society.

I still say we should target the drug dealers not the drug addicts. If a prolific offender repeatedly commits crime to pay for their addiction then lock them up for three months. If a drug dealer is selling crack on the street, look him up for a year. It's that simple. Enforcement is one of the Four Pillars. Harm reduction without prevention, treatment and enforcement is simply a one legged horse that goes nowhere.

Even if Insite continues, the police can still arrest drug dealers for selling drugs. Enforcement is one of the Four Pillars.

Posted by Dennis Watson at 1:02 AM