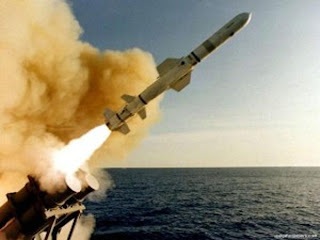 Gadhafi's youngest son and three grandchildren under the age of 12 were killed in a NATO missile strike in Tripoli on Saturday.

The strike came hours after Gadhafi called for a ceasefire and negotiations in what rebels called a publicity stunt. The commander of the NATO operation, Canadian Lt. Gen. Charles Bouchard, said he was aware of unconfirmed reports that some Gadhafi family members may have been killed and he regretted "all loss of life, specially the innocent civilians being harmed as a result of the ongoing conflict."

This is a shameful disgrace. We put a Canadian poster puppet on stage to appease the media and say we're really sorry we killed innocent children while enforcing our mandated ceasefire. Bombing one side is not a ceasefire. The rebels rejected the African Union's Peace plan because we are enabling them. We have no idea who the rebels are. Some have documented connections to the Taliban. Gadhafi contributed to Sarkozy's election campaign. This war is about oil, nothing else.

Sarah Palin may be a wingnut but Donald Trump is a whack job. Trump wants to run for president. On Libya, he says: “I would go in and take the oil… I would take the oil and stop this baby stuff.” On Iraq, he says: “We stay there, and we take the oil… In the old days, when you have a war and you win, that nation’s yours.”

After the Canadian election we know Stephen Harper will spend a huge amount of money on many fighter jets made by a company one of his candidates lobbied for and will spend a huge amount of money for more prisons to be built for nonviolent crime. In contract Jack Layton will scrap the oil bombing jets for an improved navy and will hire more doctors and nurses. I know who I'm voting for.