Wow, with a last minute NDP surge in popularity in the last two weeks of the election campaign, the election proved to be a nail bitter that did indeed make history. First, it is amazing how the NDP swept Quebec. I think it is remarkable. I have nothing against Duceppe or the Bloc. Seeing Quebecors who previously voted for the Bloc vote for the NDP tells me all of a sudden many Quebecors feel included. In fact I have a French friend in Quebec who has been telling me the feeling in Quebec is changing and that it's more of a global perspective. Helping Quebec feel included is a good thing. That obviously is not something Harper wants to do.

I'm thrilled to see the Green Party finally get a seat and am thrilled it turned out to be Elizabeth May. I think banning her from the leadership debate was shameful. My heart was softening toward Iggy at the end. My initial concern about him was the fact that he wrote a book saying torture is OK. Harper feels the same he's just lest honest about it. He lies and covers it up. Then when a whistle blower leaks it out to the public he fires the whistle blower and slanders him. Not to worry. Justine Trudeau will save the Liberal party. I just wish more Conservative seats went to the NDP not Liberal.

The end result is a disaster. A conservative majority. It's nice the NDP are the official opposition but now that the Conservatives have a majority, the country is worse off. Once again there will be no debate on any issues. The Conservatives will let the NDP speak on a bill while they cover their ears and mockingly say bla bla bla then cram through their unbalanced crime bills just because they can. I do not support closing more schools and hospitals to build more prisons for nonviolent crime or jets to bomb countries for their oil. And I most certainly don't support raising taxes with the HST to pay for them.

It was shocking to see Gordon Campbell and George Bush get elected to second terms. No doubt Harper will also hang himself when given enough rope just as they did. I do support democracy but I will record my dissent. It's the lies that get me angry. We will watch his spending because he already spent Paul Martin's budget surplus. It's kind of sad that the Conservatives only got 39.62% of the vote compared to the NDP's 30.62% yet they got 54.2% of the seats. Indeed, we will watch their spending closely because the lies are no longer believable. 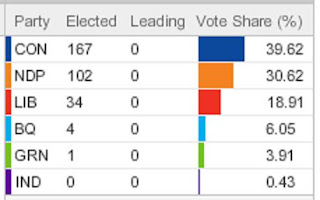 On the brighter side I can say with conviction that I did not vote for Stephen Harper and I do not support him. Donna Cadman lost her seat because a vote for her was a vote for the people that tried to bribe her husband with an insurance fraud. The general public has no idea of all the bizarre things Harper has already done and are just beginning to find out about them. I can in all sincerity extend the hand of brotherhood to Quebec in the spirit of fraternity. After all, it was the French revolution that was built upon Liberté, égalité, fraternité. Harper has none of those qualities.

Stephen Harper did not get 54% of the votes he got less than 40% of the votes. He is not fiscally responsible. He spent Paul Martin's budget surplus. Stephen Harper is no Preston Manning and no Lester Pearson. He's just another Brian Mulroney who I might add committed perjury and defrauded the Canadian people out of $2 million.