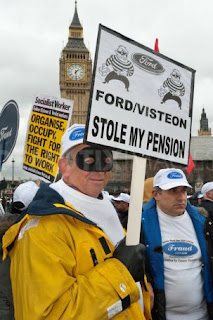 Front page of the Globe and Mail today had the headline Pensions. The article quotes some numbers and then comes up with a very disturbing conclusion. They say that more than half of the country’s pensioned workers are in jobs in the civil service or at government-funded institutions such as universities and hospitals.

They then proceed to claim "While job losses in hard-hit sectors have helped to drive down the number of employees with pension plans, many companies have also looked to cut costs by eliminating so-called defined benefit plans – which pay the worker a guaranteed income upon retirement – for new employees at least."

They are claiming that since the number of Canadian workers with pensions have decreased in the private sector compared to the public sector companies are trying to eliminate pensions to cut costs and imply that public sector employees should consider also taking the roll back to their pensions.

That's like saying there's a bank robber loose and since he has robbed half the banks, everyone else should give up their savings too. Pensions are sacred. The Corporate trend of eliminating pensions to cuts costs is a clear example of how fucked up our society has become.

Aside from the fact that they fudged their numbers. “It comes back to an employment story more than a pension story,” said Paul Forestell, senior partner at pension consulting firm Mercer. “Jobs disappeared, so there are fewer people working in manufacturing in the private sector. It’s not necessarily that [pension] plans disappeared, there’s just less people employed there.”

Yet in October of 2009 the Globe and Mail ran another article entitled Bankrupt companies, pension promises destroyed. That article states that there are 17.6 million people in the Canadian work force and that 11 million Canadian workers are without pension plans. That is not a good thing. We should be encouraging pensions not discouraging them.

Yet the Globe and Mail have just run another article about pensions entitled: Messing with politicians’ pensions can have unintended consequences.

They claim that messing with a politician's pension is taboo. Then why is it fair game to steal everyone else's pension? Answer: It's not. Canada’s aging work force hasn’t saved enough to retire. Pension benefits are being slashed, employees are working longer, the elderly are selling their homes and going back to work. This is not a good thing. Trying to encourage companies to steal pensions to cut costs is just plain wrong.