The Double Scam and the Texas Bank Robbery 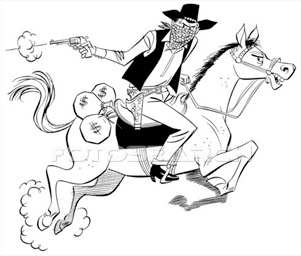 We've heard of double dipping but a double scam is something rather new. I'm not talking about a card trick. I'm talking about a stock swindle. We've talked about the Bush family's involvement with oil fraud.

Donors would invest in the fake oil field. They would be paid half their investment in the limited partnerships before they became insolvent. They got to write off the other half of their investment on a 2:1 leverage basis, which was perfectly legal under the lax laws at the time. The net effect was that they came out whole on an after tax basis.

That scam defrauded the American people out of tax revenue because the investors wrote off the loss in their fake company which meant a reduction in tax revenue to the government which had to be recovered from the average citizen.

The double scam is the same thing twice over. Al Martin used the following example: "I will use MCorp as an example, wherein a corporate artifice could be formed by Jeb Bush, let's say. Money could be borrowed from MCorp. The money would then be used to short (sell short, in other words) MCorp's stock. When the stock plummeted, the shares would be bought back at a large profit, and the original load itself would be defaulted on through the marginal, corporate entity that originally borrowed it, which most likely existed nowhere except in an attorney's file cabinet." (The Conspirators page 100)

I'm not sure I understand the selling short thing but I do understand defaulting on a bank loan through a fake corporation. BTW "In March 1989, when MCorp failed, is was the 36th largest banking entity in the United States. As the second largest banking entity in Texas, MCorp consisted of 25 banks, 86 banking offices, and 1 trust company, all located in Texas. The company had assets of $18 billion, and it's common stock was listed on the New York Stock Exchange M. MCorp had a reputation as one of the most progressive banking entities, in terms of both technology and personnel."

"MCorp suffered two straight years of quarterly operating losses beginning with the fourth quarter of 1986. The losses stemmed primarily from an increasing amount of nonperforming assets and loan charge-offs. The oil industry in Texas and the Southwest had collapsed."

They lost their money due to scams. It wasn't that the oil market dried up, It was the oil fraud that milked them dry. The test run for the big one was in 1989 when the government dished out $2 billion for MCorp alone.

Al Martin claims that there were three major Texas lending institutions which were very prominent in the Iran-Contra fraud and were, in fact, taken down by the fraud.These were Texas American Bancshares, then chaired by Bobby Corson, Allied Bancshares of Texas, then chaired by the infamous Walter Mischer, and thirdly, MCorp. (page 99)

These were the three largest savings and loans and/or chimerical banks in Texas in the mid-1980's. The combined losses in these institutions totaled some $5 billion. By 1988-8, these banks were, in fact, insolvent.

Mischer and Corson were later investigated by various Congressional committees as to the nature of unrepaid Iran-Contra loans. In some cases, these were some of the few groups of institutions where the CIA was directly involved.

In fact, by 1989, it was determined that the CIA had borrowed for illegal, covert operations some $350 million from these three intuitions. It also failed to repay that amount. These banks were involved principally in fraudulent Iran-Contra related profiteering - realm estate loans, oil and gas ventures, illegal securities transactions, ect.

Al Martin gives another specific example of the double fraud. One that he claims he himself did under the direction of Jeb Bush.

"What I did (as a matter of fact, Jeb Bush introduced me to the loan with certain provisios about where parts of the proceeds were to go later on ) is that I formed a separate shell known as Mar-Tech Industries. I borrowed $85,000 from MCorp through Dean Witter. Through the account that Mar-Tech controlled at Dean Witter, I was able to short 10,000 shares of MCorp preferred at varying prices between $8 and $8.50."

"Within three or four months, M-Corp preferred shares had fallen in value to $3. I then covered my 10,000m shares between $3 and $3.50 a share making approximately $50,000 profit. I then proceeded to dissolve Mar-Tech and defaulted on the original $85,000 loan, after having made two interest payments."

"I now has $135,000 in total profits, as you loosely describe $85,000 illicitly obtained from a fraudulent bank loan, or a bank loan that I obtained under fraudulent circumstances, plus $50,000 garnered through the short sale of said stock, essentially using the bank's own money to short the stock and then defaulting on the loan. Others did this in much larger quantity than I ever did." (page 101)

I'm not reposting this information to teach people how to scam the banks. I'm reposting it so the banks will see how they were scammed and that the Bush family were directly involved in all this which makes George Bush's visit to Surrey very problematic indeed. We do not want him to defraud our banks like he did in Texas.

Not that stock scams are anything new to Vancouver. In fact that is the reason we don't have a stock market any more. 60 Minutes did a special on the numerous fake companies that would rise on hype then crash when the directors took off to Florida for the summer only to come back in 6 months to do it all over again. This kind of investment fraud destabilizes the market, our economy and destroys hard earned pensions which is absolutely not acceptable. 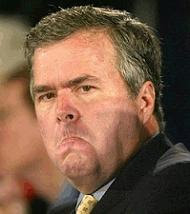 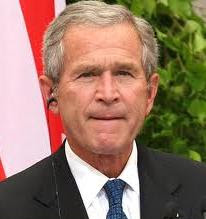 It appears they did the same thing in Denver. Neil Bush was on the Board of Directors for Silvderado Savings and Loan. That collapse cost tax payers $1 billion. Another report claims it was more like $1.4 trillion. Federal regulators accused Bush of conflict of interest. He was never charged criminally but he was sued. They settled out of court for $26.5 million and had a republican fundraiser to help Neil cover his portion of the costs.

Get this, the S&L crash was a result of puring money into Neil oil fraud called JNB Exploration. Over a period of five years JNB drilled over 25 wells in four States and didn't find a drop of oil. Neil started the company with two former coworkers who made Neil president. That's when Neil became a director of Silverado Savings and Loan and approved loans over a million dollars for his two partners. Somewhat conflicted indeed. Neil Bush helped cause Silverado to crash and get a huge bail out while he kept getting huge salary increases along the way.

Don't forger George Bush's oil fraud culminated in Harkern Energy. In 1990 George Bush sold of a large block of shares in that company right before the company reported a larger than expected loss for the previous quarter which trigger a substantial drop in the value of the stock. Bush was accused of insider trading.

Before Harken Energy the company was called Arbusto Energy and defrauded the bin Laden Family just like Sarkozy defrauded Gaddafi. It was revealed that Jim Bath made a $50,000 investment in Arbusto on behalf of Salem bin Ladden, Osama's brother who later died in an ultralight accident in Texas. However, Bill White claims the court documents revealed that the $25,000 dollar investment in 1979 and the $25,000 investment in 1980 was just Bath's commission and that the Saudis had actually invested over a million dollars.

Bush later got $25 million from Osama's brother in law for another oil company. White claims the Saudis would give brief cases of cash to the lawyers who would in turn put the money in Bush Sr.'s campaign fund. They got around the law banning foreign political contributions by giving the money to lawyers which was then protected by lawyer client privilege. Well kinda.

Don't forget that all these banking scams were made possiible because the banks were deregulated. The Depository Institutions Deregulation and Monetary Control Act of 1980 (DIDMCA) had phased out a number of restrictions on banks' financial practices, broadened their lending powers, and raised the deposit insurance limit from $40,000 to $100,000 (raising the problem of moral hazard). Banks rushed into real estate lending, speculative lending, and other ventures.

In July 1982, Congress enacted the Garn–St. Germain Depository Institutions Act of 1982 (Garn–St. Germain), which further deregulated banks as well as deregulating savings and loans. First they deregulated the banks, then they defrauded the banks and bailed them out with tax dollars. That is a double scam alright.

Yet the banks benefitted too. Removing restrictions on interest charges Canadian mortgage interest rates increased from a low of 10.31% in August of 1978 to a high of 21.46% in September of 1981 which doubled a family’s monthly mortgage payments and caused many foreclosures. Mortgage rates have since subsided but credit card rates haven’t despite such a drastic drop in the prime lending rate.