The news is full of talk about the assassination of Osama bin Laden. The kool aid drunk frenzy is strange. I should say that I have a lot of respect for Obama. Pulling out of Iraq and closing Guantanamo Bay were good things. Pouring troops into Afghanistan to cultivate and harvest opium and to protect the oil pipeline that was taken from Bridas and given to an American firm after the invasion was not.

Now we hear a bizarre tale about how the assassination of bin Laden has somehow brought him to justice. How can murdering someone without a trial have anything to do with justice? That's like hanging Saddam Husein for using chemical weapons the American sold him.

The Pentagon bin Laden confession video didn't look anything like bin Laden. Anything the CIA or MI 6 says justifying any invasion is suspect ever since MI 6 was caught red handed intentionally giving the media false information about Iraq's weapons of mass destruction in what they called Operation Mass Appeal.

The third tower fell when no plane hit it. Explosions were seen and heard going off. Larry Silverstein admitted they said they decided to pull the building. The building fell at free fall speed just like a controlled demolition. It didn't gradually cave in under the pressure of upper floors collapsing on lower floors. That would not have happened at free fall speed.

The real interesting thing is the fact that Professor Stephen Jones found thermite in the 9/11 rubble. Thermite is a super hot compound they use in controlled demolition to melt load bearing beams so the tower will collapse into it's own blueprint. Thermite would explain the melted cars and the molten metal found in the ruble weeks after the collapse. Stephen Jones is not the only scholar that thinks 9/11 was a controlled demotion. He founded the group Scholars for 9/11 Truth and Justice. I do not believe Osama bin Laden was responsible for 9/11. Watch Loose Change 9/11. 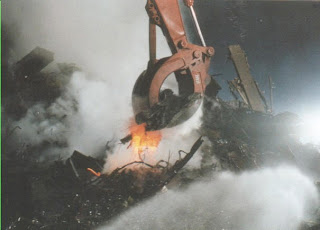