The Dark side of the Black Door 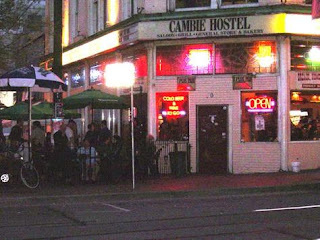 In court, witnesses give testimony which becomes evidence. I posted a bizarre story how one person claimed people claiming to represent the Hells Angels barged into the American Backpackers Hostel in Vancouver with guns drawn looking for a kid who was selling pot there. The witness claims they said they know the kid lives there and is selling pot in their area. They said the kid has to leave town and everyone there has to buy pot from them at the Black Door which is right across the street from the Amsterdam Cafe.

Then a blog reader admitted you can indeed buy pot from the black door across from the Amsterdam cafe which is run by biker types and that the police are well aware of it and let it continue. They only asked them to shut down during the Olympics so it wouldn't be so publicly visible but let them start up again right after the Olympics was over.

Now we have another tale from another tourist staying at the Cambie who claims he witnessed a couple guys who he was told were from the Hells Angels beat the tar out of a guy for selling pot in their neighbourhood which was in the exact same area. Here is the other witness' account:

"It was a few years back, in 2007. I was staying at the Cambie, very close to the Amsterdam Cafe. It was my first day in town, and after a few beers in the hostel bar with some fellow backpackers, I went outside with a couple of Aussies to smoke a joint. We were minding our business when a couple black guys who looked like crack heads came up to us and sold me some pot. It was the same quality and amount, but half the price as the "dealer" who was selling to the backpackers around the hostel."

2 seconds after the deal was done, the black guys started walking away and out of nowhere a door opens across the street and 4 large bad ass biker looking dudes come storming out asking me what they had just sold me. The black guys took off running and 2 bikers chased them as the other 2 stayed with me. They asked me how much I paid, have i ever seen them before, was I not happy with the prices or quality from their dealers, etc etc. They honestly seemed very interested in why I was not buying from their guy inside, more than they were mad at me for buying from the crack heads. After a few minutes of simple conversations, the other 2 guys returned and asked me to come around the corner with them. The 2 black crackheads were sitting on the curb almost in tears, begging me not to say anything. One of the bikers asked me to point out the one who actually sold the weed. I am not stupid, I immediately pointed him out, and he screamed "no no!! It wasn't me!!" He was terrified, and I soon learned why. One guy pulled out a small metal pole, and another a chain. They beat this poor guy almost to death. I felt really bad for him, and a couple times I even said "Ok ok that's enough".

After the beating they told me that in this city, things had to be done like this. They told me that this was their block and they protected all the backpackers and tourist from being able to come into this area. They said if it wasn't for them "this area would be controlled by niggers and crackheads". They told me that if I had any problems while I was in Vancouver they could come straight to me. They also gave me a handful of dime bags for free, but warned me to not by anything from any "nigger" again on their block.

The next day I told the Aussies, who had all been there for a while what happened and they told me that they guys were Hells Angels (which is why they took off on me). For Americans (I'm from the South) Hells Angels only exist in movies. I didn't even know they were real.The next few days I just studied everybody and everything. I spent all day everyday on East Hastings. I dressed in my oldest clothes and just tried to blend in. I have never been so curious in my life. I couldn't believe how drugs were just sold in the open like that. 15year old kids shooting heroin on the side walk became normal. I watched gangsters just go from a building into an alley way with a large backpack and then come out of that same alley with no back pack and all of the sudden seeing a line of addicts form in front of some 16 year old Indian kid...who yes...now had the back pack.
________________________________________________________

I'm not saying don't let anyone sell pot I'm saying don't let the Hells Angels use violence to control the drug trade. Which I realize is somewhat problematic. They could bust the black door which they likely should, yet if pot no longer becomes available, then everyone is gonna be upset and is likely why nobody says anything.

The only difference is in East Van they help the police contain the crack dealers to a certain area which makes the police's job easier. If the Hells angels will beat the tar out of a crack head for selling crack in Gastown then that makes it much easier for the police. Yet the hells angels are the ones profiting from the sale of crack at Oppenheimer park. Sure it looks cleaner now because it's done more discreetly but look at the violence the Hells Angels use on rival drug dealers and the violence they use on addicts who have debts. That kind of violence forces addicts to commit crime to pay their debts. That kind of violence is wrong and is exactly what we support when we buy pot from the Hells Angels.

BTW the reason this doesn't happen in the States is because they simply wouldn't put up with it. They would get a 12 year old kid to shoot the big bad biker dead. The kid would be a young offender and the problem would be solved.