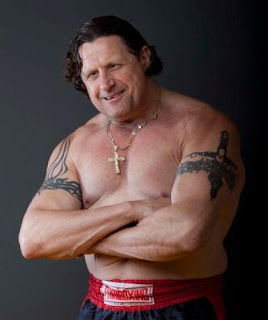 Speaking of the Surrey House of Horrors, let's not forget the Prince George Torture Chambers the police found. Through the media the police have told us A) that the Hells Angels run the drug trade in Prince George and B) that they found crack houses with addicts chained in the basement who were tortured for drug debts.

Then came the GTS. Kim Bolan discovered a GTS leader striking for the Renegades in their company wearing their rocker. That would pretty much document the Hells Angels connection to the GTS as well. Ricky fat ass liar can cry all he wants but the subsequent gang rape by GTS members in the Renegades clubhouse would reconfirm that association as well. No publication ban on naming the charge bitch.

Now the police claim they did find crack houses in Prince George where addicts were imprisoned and tortured for drug debts. Let's compare that with the reality tv series produced by the deranged Tony Terezakis.

Tony was a Hells angels associate who sold drugs for the Hells Angels in the American Hotel and the Cobalt. He admitted to that and plead guilty after he was caught. Yet he also had a huge amount of videos he made of him beating crack addicts for debts. Tony claimed he was just making a reality tv show.

The scenes in his movie were all staged, he claims. The alleged assault and confinement victims, including Tommy, consented to play hapless punching bags. Terezakis described them in court this week as actors peforming "stunts." They are beaten, spat upon, smeared with feces.

Terezakis insisted they were all compensated, usually with drugs. Tommy was paid in heroin. In fact, Tommy earned a little extra, Terezakis recalled, because his scene involved violence. The pay scale moved up or down, depending on the beatings the men took.

While there's nothing amusing about the abuse he dishes out on video, he laughed when describing certain scenes in court. It's hard to decide what's more sickening: his cruel depictions of violence and degradation, or the sight of him watching, a smile on his face.

That's kind of a good point. Here's a deranged subhuman who enjoys seeing addicts beaten to a pulp. Kinda like they were doing in the Surrey House of Horrors and in the Prince George torture chambers.

One of Tony's co accused, Andrew Goosen, was sentenced to drug trafficking and assault. The judge concluded "There is little, if any, evidence that Mr. Goosen took any steps in the drug trafficking without Mr. Terezakis' specific direction,"

There are two points in the Goosen case. One is that he sold drugs under the direction of Hells Angels associate Tony Terezakis. The other is that he plead guilty to an assault he was filmed performing in the "Reality TV Show."

Terezakis also described a rehab "program" he ran for Vancouver prostitutes, to whom he cloyingly referred as "the most vulnerable in our society." He supplied them with daily doses heroin, his way of "weaning them" off the drug.

Now we have another direct connection between the Hells Angels selling heroin to prostitutes in East Vancouver and the violence associated with maintaining that business. Tony Terezakis was convicted of selling heroin as well as cocaine for the Hells Angels. That kind of puts a dark twist on what our tax dollars are really supporting at insite.

Nevertheless, looking at the insane and deranged case of Tony Terezakis in East Vancouver, I'm more likely to believe the police when they describe the torture chambers they found in Prince George than the Hells Angels who deny they exist.