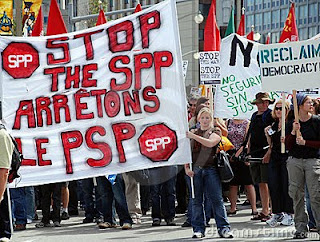 Recently, Alaskan oil companies have sued the government for handing too much land to polar bears. I kid you not.

The thought is rather absurd. A democratically elected government can make parks and protected habitat all it wants. Yet not when we hand over those democratic rights over to tribunals in over reaching trade agreements like NAFTA, TILMA and the NAU.

Two U.S. oil companies are suing Canada for $60 million under NAFTA’s Chapter 11, because the Newfoundland government is demanding that part of their research and development (R&D) budget be spent in the province.

The Council of Canadians explain that under NAFTA’s Chapter 11, foreign investors sue governments over public measures like environmental protection, public health protection and the delivery of public services if they interfere with their proﬁts. These cases are not adjudicated by Canadian courts, but by secretive trade tribunals.

This does not give any consideration to the country’s laws, commitments to social programs, and environmental, labour or human rights. By giving foreign investors the right to claim damages when government measures interfere with proﬁts, NAFTA has empowered private tribunals to resolve public policy disputes. The result is that foreign companies may use NAFTA freely to challenge public policies and laws they oppose.

So what happens when a corporation sues the government under NAFTA and loses? It rewrites the agreement so that it will win next time. That is what we see with TILMA and the NAU. TILMA is a trade agreement between the provinces that makes it illegal for any level of government to create a law that will inhibit a corporation's ability to make a profit. The same with the wording of the NAU. Oh I mean the security prosperity partnership.

If we want to create a law that protects the environment, we can't. We just signed away that right. So when a private company wants to make a profit by dumping nuclear waste in Canada they can sue us if we try and stop them because protecting the environment would inhibit their ability to make a profit. I kid you not. These are serious issues being signed away in back rooms as we sleep.

Email ThisBlogThis!Share to TwitterShare to FacebookShare to Pinterest
Labels: Politics