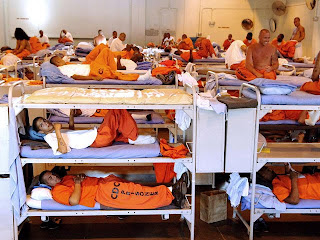 This case is another example of bizarre. It resembles something out of the Twilight zone. It is a clear example of a prison system that is not working and a judicial system that completely oversteps it's jurisdiction.

We know the prisons in California are seriously over crowded. Three to a bunk is bizarre. We know that privatizing the prisons, which was a huge conflict of interest has miserably failed. Yet when the courts order the government to release over one quarter of the prison population in two years, that sweeps the pendulum of absurdity in the opposite direction.

Justice Antonin Scalia, called the decision "staggering" and "absurd." It "takes the federal courts wildly beyond their institutional capacity," he wrote. I completely agree. Yet there is a problem and doing nothing about it is negligent. The court said the state's prisons had "short of minimum constitutional requirements" and "needless suffering and death" have resulted.

A privatized prison is mandated to make a profit. Private corporations have no moral conscience. Prisoners dying or not able to get adequate medical attention do not concern them. In fact, despite the over crowding, we see the rise of salaries. Lifeguards get 200,000 a year. The lowest paid is 100,000. A deputy sheriff can retire at 55 with 100,000 a year for life.

The problem is a person who is in on child support, DUI or some other non violent offense like smoking or selling pot, gets lumped in with everyone else. So how are we going to execute the release of one quarter of the prison population? Jesus Barabbas or Jesus of Nazareth? Someone who has committed a nonviolent crime or a convicted murder? You tell me.

Is the judicial system going to become like a trip to Vegas? Right after the trial is over and the judge has made his decision, let's roll the dice to see if the criminal actually goes to jail or walks away free. Absurd as that may seem, that is where we could be heading.

The logical response would be to set the nonviolent criminals free first. Everyone hates deadbeat Dads but bloody hell, garnish their wages don't send them to jail. Sending them to jail makes the innocent children suffer. How are they going to pay child support in prison?

There is a huge difference between selling pot and selling crack. The judicial consequences need to reflect that. Decriminalizing pot not legalizing it would be a logical medium which would let us fiscally address violent crime without raising taxes and bankrupting the system. Statutory release should be done away with. Inmates should be given the option of working to qualify for early release.

And this just in: California Accidentally Released Violent Inmates To Reduce Prison Crowding. It doesn't take a brain surgeon to figure out that nonviolent offenders should be the ones released first. Yet somehow the privatized prisons have a hard time understanding that. 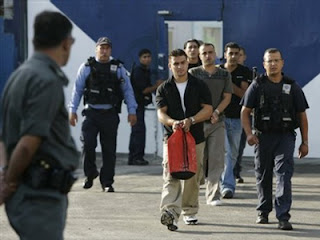