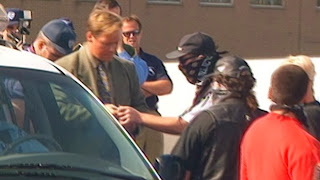 Global and CTV are both reporting that Benoit Roberge, an ex-Montreal police officer has been handed an eight-year prison term for selling sensitive information to the Hells Angels. No word on any charges against a second officer Roberge said worked with him or his claims that he was not going down alone which would imply the problem was bigger than just one person.

No word on why René Charlebois mysteriously committed suicide after escaping prison in Quebec. He was the Hells Angel that blew the whistle on Benoit Roberge. After his "suicide" several incriminating video tapes were found. At least Quebec is dealing with the problem with corruption investigations not like the EPS or us here in BC. Everything here is business as usual. No investigation means no corruption so they claim.