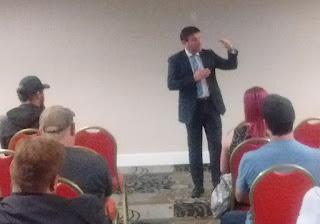 Roman Barber spoke at the Fleetwood Comfort Inn tonight and I attended. Everything he said was right on the money. It was a breath of fresh air. He explained the ranking system on the ballot and why he was asking people to make him their first choice. I already voted and made him my second choice after Leslyn Lewis. He joked about how many people have told him he was their second choice. He said if you rank a more popular candidate first and him second, then your vote for him doesn't count until the more popular candidate gets knocked off the ballot.

Roman said two months ago he wouldn't have been allowed to run because he was anti lockdown. He said the party was pro lockdown until the truckers came to town. That has been a positive change. At first, I was going to vote for Jean Charest. Until he was so vocally opposed to the Truckers. That's when I ditched him. Scott Aitchison and Patrick Brown are idiots. There was no need to disqualify Brown from running.

Roman addressed Justin Trudeau's ballooning debt and the 2 billion dollars a month of interest we are paying on that debt which increases with rising interest rates. He said he didn't think we would be able to address it by cutting and saving. He said the only way we could address it was by increasing revenue and letting Canadians work. He supported the energy sector and cited how Newfoundland has become prosperous from their offshore drilling.

When asked his position on abortion he said he believes in small government and doesn't think the government has the right to tell anyone what they can or can't do. Yet he also said that other members of the party (like Leslyn Lewis) have a right to hold and express their opinion.

He also talked about how the PPC split the vote last election and cost the party 26 seats which would have won them the election. That's the problem. Globalists within the party rather see Justin Trudeau in power than a real Conservative who supports civil liberty. Roman made a lot of good points and win or lose, we need to hear more from him.

BTW that third Conservative Leadership debate was a scam. They sent out an email asking the members if they thought there should be a third debate but they didn't give you the option to say no. They just provided a link for you to click on to say yes. When I replied to the email and said no, it was returned.