Lilly Singh on the Morning Show 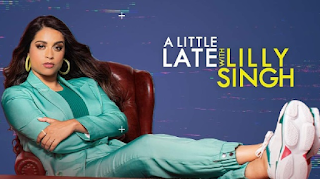 I noticed Lilly Singh was on the Morning Show today talking about her new book. I saw it in the lunchroom at work on my break. I cut the cable years ago. I don't want to hate. I just want to put reality into perspective. Lilly Sing was a Canadian YouTube superstar who made it big in LA and got her own night show on NBC. I was thrilled for her. Sadly the narrative has taken over.

Before getting her late night TV show she did a really funny YouTube video with the Rock. Everybody likes the Rock. Now the YouTube censorship and bias is completely out of control. If you are a Conservative you will be censored and demonetized from YouTube. That's a big deal because Lilly Singh made a lot of money on YouTube. That means that will never happen if you are a Conservative. That totally molds the narrative on that platform but it doesn't stop there.

Hollywood has always been a moral cesspool of self indulgence. Now that Hollywood in under new management, it also has a narrative. Even Disney. The Communist Party of China now owns Disney. The influence they have over Hollywood's narrative is absolutely ridiculous but it doesn't stop there. All the talk shows on TV have that same ridiculous narrative. If you want to make money in Hollywood you have to sell your soul. There's no compromise left. The Morning Show on Global is ridiculous. It's a manipulative form of the View which is complete nonsense.

I was somewhat disappointed when Lilly Singh had Dr Fauci on. That was shameful. Dr Fauci is an idiot with bad personal hygiene. She had to do it to endorse the network's narrative.

I think it was sad she had to come out as bisexual to find acceptance in fake woke LA. I don't care if Lilly Sign is bisexual. She is funny as f*ck. I just kinda get the feeling that she had to come up with that story to find acceptance in that yuppie high end trailer park. Like I said, if she really is bisexual, more power to her. It's just that whole Harvey Wallbanger world that is now consumed with the new narrative is just so repulsive. It's not just the fake news. It's a fake world that has infiltrated everything in Hollywood and television. Morality is lost and misrepresented there.