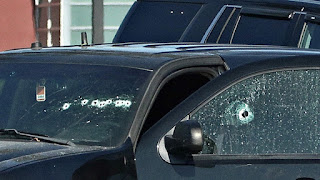 Update: The suscpect has been identified as Jordan Daniel Goggin. The motive is still unknown.

CTV is reporting that "A suspect believed to be responsible for shooting multiple people in Langley, B.C., was killed by police Monday morning. Police said four victims were found in multiple locations across Langley early in the morning. The first shooting happened at about midnight, followed by one at 3 AM, another around 5 AM and a fourth at about 5:45 AM"

"Two men were found dead – one near Creekstone Place and another at the Langley city bus loop near Logan and Glover roads. A woman was found near 203A Street and Fraser Highway and taken to hospital in critical condition."

"A fourth victim was found shot in the leg near the Langley Bypass and 200th Street. Shots also may have been fired into closed or unoccupied businesses, police said. The victims and the suspect weren't identified by police as next-of-kin notifications are still underway. However, investigators said the suspect was known to them. Police said they're still working to understand a possible motive or connection between the suspect and the victims."

CP24 is reporting that "Bullet holes are seen in the windshield and passenger window of an RCMP vehicle at the scene of a shooting, in Langley, B.C., on Monday, July 25, 2022. A suspect is in custody after several people were shot in the Metro Vancouver city of Langley."

I have a lot to say about this but I will wait for the official narrative. NBC picked up on the story. 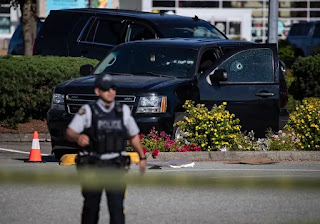