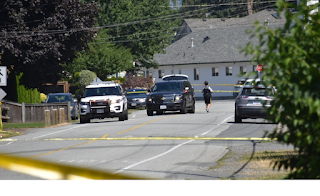 Update: CTV is reporting that "A man suspected of killing two women and shooting one man at a home in Chilliwack has been found dead, the RCMP confirmed Monday. Police said he was found with weapons and died of self-inflicted injuries."

CTV is reporitng that "Two people were taken to hospital – one of them in critical condition – after an incident that prompted a large police presence on McNaught Road in Chilliwack Thursday morning. Video from the scene shows yellow police tape criss-crossing the north end of the street, near its intersection with Yale Road."