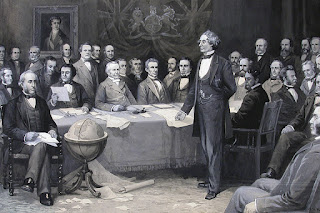 I was going to hold off on this but since it is completely our of control I have to say something about it. The mainstream media has been covering the Pope's recent visit to Canada to offer an apology for the abuse suffered in the residential schools run by the Catholic church. First I will reiterate that tearing down statues of John A MacDonald is displaced aggression. John A was a Protestant. He wasn't responsible for something the Catholic church did.

Second I will emphasize that the abuse suffered in Catholic private schools was not limited to Canada or the residential school system. Children suffered sexual abuse in Catholic private schools for hundreds of years in Boston and even longer in Ireland. Sexually abusing children is completely unacceptable. The Catholic church does not teach that it is. Neither does Hockey Canada. Just because some deviant hockey coaches sexually abused some children does not mean hockey is bad. It means bad people gravitated to those services and exploited children.

Third I will emphasize that the Communist party of China is eager to misrepresent what happened in the Canadian residential school system so it can conquer and subdue Canadians and turn them into slaves through lies. That's what Communism is and that's what Communism does.

A cultural genocide is very different than an actual genocide. They weren't lining up children and shooting them before burying them in mass graves like in Cambodia. They were not doing that. The intent of the residential schools was free education. Education is good. If you want to lift a society and help them succeed, you provide them education. We want Aboriginals to become doctors, lawyers and dentists. We want them to succeed. We always have.

Some people are outraged with the discovery of human graves on school property. Back then it was no different than having human graves on church property. People thought churches were holy and burying their dead there was sacred. It was also affordable. Just like burying children on school property was. Infant mortality in those days was off the hook. A lot of those kids died from tuberculosis. None of the kids in England liked private school back in the day. It was something they did to get an education.

As to the term cultural genocide, I think that is inflammatory and inaccurate. When you're in French immersion you're not allowed to speak English. That's to help you learn the language faster. I'm not very good at languages. My kids are great at it and I totally respect that and encourage that. That's simply not my gift. Every culture has good and bad.

Slavery was one of the traditions within the aboriginal culture on the West Coast. They would raid other tribes and carry away slaves. Slavery is not a good tradition. That is what Communism wants to bring back and I completely reject it. I always have.

I find it insanely hypocritical and offensive that the Communist party of China would dare mention aboriginal rights in Canada when we see what they are doing to the Uyghurs and the Tibetans. In Communism Aboriginals don't have any rights because in Communism no one has any rights.

Years ago I shared a picture of the scared hoop with a friend and explained it's meaning. Black, white, red and yellow - it represents all the races of the earth working together in harmony. He takes one look at it and says well I'm brown and I'm not represented by your little club. My mouth dropped open and I starred at the pictured stunned. All I could say is I think you're missing the point. Of course you're included. Everyone is. Red isn't really red. It's kind of brown actually.

I am no fan of Imperialism but this new obsession with the term colonialism is a red flag. The Red Braid Alliance for Decolonial Socialism are Communists. They have an agenda. Promoting aboriginal rights is not one of them. Decolonial Socialism wants to turn everyone into slaves, native and nonnative. That is not progressive or positive and I reject it.

I believe that the current Communist conglomerate that is the driving force behind the World Economic Forum will one day embrace a state religion. I oppose that. Embracing a state religion is the same as abolishing religion altogether. In fact it is a means to that end. First you embrace one religion and ban all others. Then you ban that one religion and as George Bush would say, Mission Accomplished. I support freedom and oppose slavery. I support a free republic where civil liberty is protected by law. That is what I support and I am proud of my heritage.