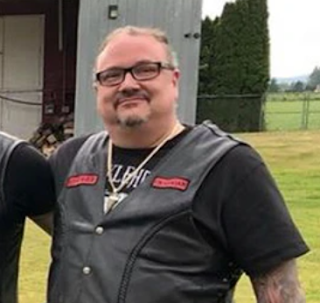 CTV is reportng that "According to Mounties, the investigation led them to a group called the Throttle Lockers Motorcycle Club, which the RCMP describes as a "support club" for the Kelowna chapter of the better-known Hells Angels biker club. They allege the three arrested were members of the Throttle Lockers and that they were operating a large-scale trafficking operation as the clubs expanded from Kelowna into Kamloops."

"In a news release, the unit announced a variety of trafficking and possession charges had been approved against Shawn Carlisle, age 49, from Falkland, and Kelowna residents Zale Coty, 53, and Jacob Cavanaugh, 29. The charges were approved late last month, the CFSEU said, though they were not made public until Wednesday. The unit said the men were released from custody on conditions while the case works its way through the legal system."

Meanwhile back in the ranch, Dr Spin is reporting that "Zale Coty, Hells Angels associate and member of the Throttle Lockers biker gang, was a close associate of murdered Hells Angels Chad Wilson." That explains why the compromised CFSEU is targeting him.

The club killed Chad so now they're going after people who worked for him. If you take a look at his picture, Zale looks like the least intimidating and least criminal that they have ever targeted. That picture she posted looks like old timers who ride.

Recently Kim Bolan put out a story that went viral throughout the fake news conglomerate claiming that Justin Michael Wareing, the suspect charged in Cashmere Ali's murder had gang and drug trafficking links when she knew that was a bold faced lie. The CFSEU is compromised and so is Dr Spin. As is the fake news but we already knew that.

Are the Hells Angels riding in support of the Dutch farmers? Their run is on the same day.