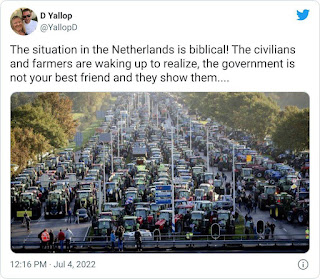 Dutch farmers are protesting the Communist government's fake environmentalism creating food shortages under the guise of reducing nitrogen emissions. This video is what happened when they caught undercover police officers trying to infiltrate their protest as agent provocetures.

Police fire shots at a tractor. Politico picked up on the story.

Police draw guns to arrest a farmer in a tractor:

I have a few Polish neighbours. The other day one of them was explaining to me that under Communism in Poland, there was no food in the grocery stores, just vinegar. He said you couldn't buy food but you could buy alcohol. That was part of their plan. As my other Russian neighbour said, first they give you cake. Then they starve you. After that, you take whatever they give you." It's time to say no now, while we still can.

Update: Farmers contunue to fight back and use a mechanical manure spreader on the police.