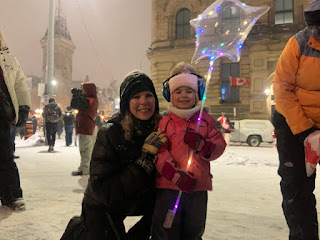 True North is reporting that "Freedom Convoy organizer Tamara Lich will be released from jail immediately, an Ontario judge ruled on Tuesday. Lich was arrested in June after being accused of violating her previous bail conditions, specifically one preventing her from communicating with other convoy organizers including Benjamin Dichter, Chris Barber and Tom Marzzo except in the presence of counsel."

"On Tuesday, Ontario Superior Court Justice Andrew Goodman ruled that Lich’s alleged breach of bail conditions was tenuous. Goodman says Lich demonstrated adherence with her conditions by seeking to change the conditions in courts and in his conversations between Lich and her surety."

“'I find it highly unlikely that this 49-year old accused with no criminal record…would face a potentially lengthy term of imprisonment,' Goodman said. Goodman ruled that Lich will not be charged with sedition or starting riots, regardless of how some people have viewed the Freedom Convoy. In his ruling, the judge said the bail process is not a forum to address opinions of the convoy’s activities nor to advance any political position."

“'No court would ever seek to control the possession or manifestation of political views,' Goodman said. The judge concluded by cautioning Lich, saying that 'it must be crystal clear to you by now that the authorities are monitoring your every action.'” No kidding.

This new arrest was punitive. They arrested Tamara Lich and Calgary-based journalist Andy Lee, simply so they wouldn't interview Justin Trudeau during his photo op at the Calgary Stampede. Don't forget the Crown prosecutor of Tamara Lich donated to Liberals. 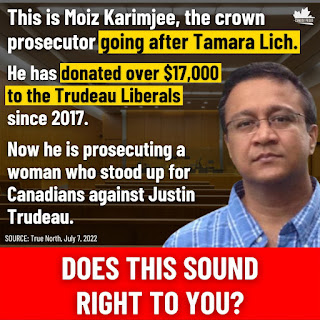