Canada Day and the Freedom Convoy 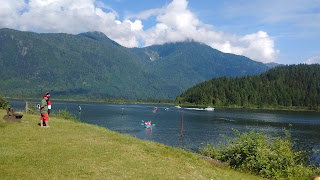 For Canada Day we broke out the kayaks and went to Widgeon Creek on Pitt Lake. There were lots of boats on the lake and lots of padlers on the creek - canoes, kayaks and paddle boards. 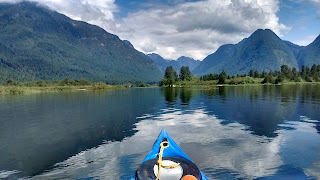 On the way back there was a canoe with a Canadian flag tied to a hockey stick.

When I came home there was a plane flying overhead with an advertising banner. That's pretty old school I thought so I read the banner and it said Freedom Convoy. Never Forget.

Food for thought. For me remembering the Freedom Convoy is to remember the huge display of public support for the truckers. It made us all proud to be Canadian. Then seeing the RCMP trample a disabled woman on horseback and seeing the police and foreign NATO soldiers stomp on the Canadian Flag and beat peaceful protesters made us all ashamed to be Canadian.

The police had the right to tow semis if they were illegally parked but they did not have the right to beat peaceful protesters. Police on Guard tried to remind police of their oath. Veterans4freedom stood for freedom and opposed violence. After James Topp completed his march to Ottawa at the tomb of the Unknown soldier, the police moved in and made some brutal arrests. 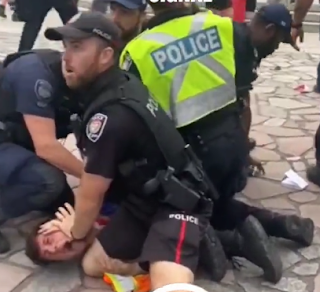 I don’t know what the suspects did to warrant being arrested but there was an excessive amount of police definitely using excessive force in a very look at me I’m a dick kind of way. That destroys public confidence and that is what they are paid to do. They are paid agitators just like the NATO soldier stomping on the Canadian flag. Ottawa canceled the permit for Police on Guard's picnic.

BREAKING: Our lawyers were just threatened with a $1000 bylaw ticket for displaying this banner in downtown Ottawa on Canada Day. pic.twitter.com/QHDa17ilwf

The Counter Signal posted a video of the brutal arrest on Twitter but has since taken it off their website. It was disgusting and once again made me ashamed to be Canadian. That kind of arrogant violence against peaceful protesters generates an emotional reaction to fight back. I share those feelings but I stand down and record my dissent. I oppose violence.