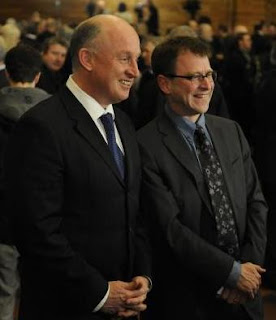 So Adrian Dix wins the NDP leadership with a slim margin over Mike Farnworth. I knew it'd be close but I thought Mike Farnworth would win by the margin. Turns out Adrian Dix signed up the most members at the last moment just as Christy Clark did which is fair game. If you can sign up new people to vote then you're a shaker and a mover so so be it.

Many reported the leadership campaign within the NDP to be a love fest with little disagreement and no mudslinging at all. That's the way it should be. It was nice to see Mike Farnworth and Adrian Dix sitting next to each other when Jack Layton came to Surrey. It demonstrates maturity and self confidence when candidates can take the high road and support the democratic process. Clearly the NDP is now a party united.

I would have liked to have seen Carol James carry the party over the top because she deserved it with all her years of hard work and unfailing courage in the face of Gordon Campbell's cruelty. If there was any question about her leadership she should have simply ran again as a candidate and let the votes decide. The back room drama was somewhat disappointing yet seems to now be water under the bridge.

I am however somewhat disappointed in the Vancouver Province's slanted twist of the outcome. Claiming the NDP has just made a left turn. What kind of nonsense is that? Adrian Dix has been an equally vocal supporter of law and order as has Mike Farnworth. Mike Farnworth was the justice critic so his appeals were more focused. That means he would make an awesome AG. Yet Adrian Dix was also at the forefront when crime increased in his riding. Which brings us to the matter of dispelling the silly stereotypes of linear politics.

The BC Liberals became very "right wing" yet they did absolutely nothing on crime. Their silence was so complacent on the matter it was suspect. The NDP were vocal at least. We need to grow up. We need to stop name calling and saying you're left wing. You're right wing. Simply because the stereotypes used to enforce those labels are no longer believable.

George Bush was right wing but he added trillions to the debt. The stereotype that the Democrats will tax and spend while the Republicans will not has proven to be untrue in both Canada and the United States.

Likewise, Christy Clark clearly is a step forward for the Liberal party. It's unfortunate that her MLAs can't see it. That will be her biggest challenge. Voters love her. The fact that her MLAs don't is suspect. That's kind of why the Liberal party fell so low in approval rating. Because they kept sustaining Gordon Campbell's bizarre insanity for so long. Including ramming the HST and spending tax dollars on the hard sell filled with bullshit about the new and improved HST. Since when did taxes become new and improved?