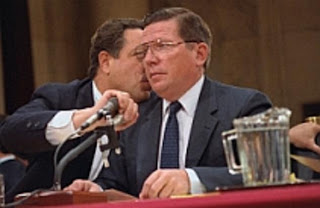 Richard Secord is a name Al Martin frequently uses when discussing the extended version of the Iran contra. Along with Oliver North of course. Turns out North was Secord's scape goat.

Secord filed a libel case against the authors of a book published in 1987 entitled Out of Control: The Story of the Reagan Administration's Secret War in Nicaragua, the Illegal Pipeline, and the Contra Drug Connection. Secord lost that case.

He was charged in the Iran Contra affair in 1987 and on March 16, 1988, Secord was indicted on six felony charges. On November 8, 1989, Richard Secord plead guilty to one felony count of false statements to Congress, and on January 24, 1990, he was sentenced to two years probation. In 1992 the Federal District Court for the District of Columbia expunged the conviction on the grounds that the US Supreme Court had earlier found the underlying indictment to be illegal and without effect. The Justice Dept. did not oppose the matter. Thus the entire Iran-Contra imbroglio ended for Secord.

May 5, 1987 during the Iran Contra public hearing, General Richard Secord testifies that CIA Director William Casey was one of the driving forces behind the illegal sales of arms to Iran, and the equally illegal diversion of profits from those arms to the Nicaraguan Contras. Secord, the leadoff witness, testifies that in addition to Casey, CIA and State Department officials aided in the efforts to provide the Contras with weapons and funds.

I think that's the whole point behind the extended version of Iran Contra. It didn't just involve Iran but was deeply involved with funding and supplying the Contras in Nicaragua which was directly tied to Operation Watchtower. Since Oliver North was in charge of everything that went in and out of Nicaragua at the time, it also implicates him.

Al Martin claims that Richard Secord was also tied to Trans World Armaments of Quebec City. He claims that Joe Clark made money off it and that the Brian Mulroney connection was a much bigger scandal in Canada than it ever was in the US. Interesting...

BTW in the picture above Secord's lawyer is talking to him during his testimony at the Iran Contra hearing. Gee I didn't think you were allowed to consult with counsel during your testimony in court...