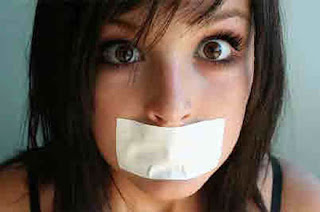 I have been notified by someone claiming to be a lawyer representing two of the accused rapists in the sexual assault case at the Renegades clubhouse in Prince George that there is some kind of publication ban on the case. Although they have failed to provide me a copy of the ban which would be normal practice in making such a claim, I have removed their clients names from my blog on a temporary basis so I may confirm whether or not such a publication ban does in fact exist and what it really covers. I will however, record my dissent on the matter and wait for a copy of the alleged ban so we can get the name of the judge and sue him for civil liability in failing to comply with the constitutional duty of public safety. As well aiding and abetting a criminal organization. These over reaching publication bans on Hells Angels cases have gone on long enough. The police were sued in Ontario because they let the Balcony rapist out of prison without fulfilling their duty to warn the public of a rapist loose in their community. The Balcony Rapist re offended and the victim then sued the police for failing to fulfill their constitutional duty to provide public safety. That is why the public was notified when the Balcony Rapist was set free in Surrey. I attended that public rally and saw Mayor Dianne Watts speak at that rally. I completely support a person's right to a fair trial and I completely support due process and the Charter's presumption of innocent until proven guilty. Yet, if someone has been charged with a crime, it is not unlawful for me to say that person has been charged with a crime. The public is well aware of the courts presumption of innocence until proven guilty. The newspapers report charges on a regular basis. Publication bans sometimes arise when the media coverage of a case is high in order to give the accused the right to a fair trial. If for example a jury is to be selected to hear a case and news reports about the case have been rampant, it is possible that reading some of those news reports may taint a potential juror's bias in the case. However, if the matter is heard by a judge without a jury, no such conflict exists. Judges are mature adults who are well aware of the application of the law. They know what is admissible and what isn't. Judges aren't swayed by hearsay evidence. In fact often before a case goes to trial the judge holds a voir dire which is a trial within a trial. It is a hearing to determine the admissibility of evidence. So the judge presides over a mini trial and looks at the evidence and states what can be submitted to trial and what can't. In a voir dire, the judge will obviously see some evidence that it says may not be submitted as evidence in the real trial. The fact that the judge saw something that was not allowed to be admitted to the trial did not taint his neutrality on the trial or the presumption of innocence until proven guilty. That leads us to ask the question, why are so many Hells Angel related cases getting publication bans while others are not? Does everyone charged with sexual assault get a publication ban on their hearing or is it only Hells Angels associations who commit sexual assault that get publication bans on their trials? If the law is not equally applied then the ban is unjust. Moreover, the court also has a constitutional duty to provide public safety just as the police do. If the Ontario police can be sued for not notifying the public about the balcony rapist, then a judge can also be sued for hiding the fact that an accused rapist is loose on bail. A publication ban on a sexual assault case gives rise to personal legal liability if any of those accused re offend just as it was with the Balcony rapist. Then we have the whole can of worms of the legal liability of aiding and abetting a criminal organization with excessive publication bans that do not expire when they are supposed to which is a flaming violation of the Charter of Rights which is the highest law of the land. If a judge makes an order that violates the Canadian charter of rights, it is an illegal order. So please advise which course we will now take. Civil liability for failing to provide public safety or criminal liability for aiding and abetting a criminal organization. Justice will not sleep forever. Mark my word. By the way, just out of curiosity, is the judge that made this alleged publication ban a college of David Ramsay who also was a court judge in Prince George? Please advise. ------------------------------------------------------- Mind you it has been brought to my attention that when you search the court registry no publication ban has been entered into the file. Maybe that's why the hillbilly lawyer didn't send me a copy of the publication ban - because he's lying and it doesn't exist: 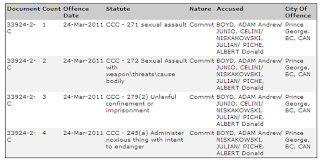