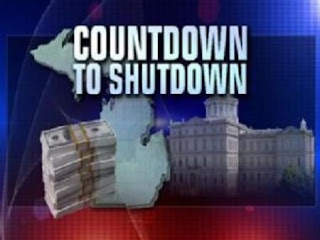 I've been asked about what a U.S. Government Shutdown means. I had to look it up because I didn't know. In Canada we can have non confidence votes which will result in an early election but the United States have relatively fixed election terms. I wasn't aware about the Government Shutdown clause.

Apparently this happens when they can't agree on a budget. Essential services like police and military continue but all other nonessential government workers stop going to work. Personally I find that somewhat bizarre but apparently that is the way their system works. Or rather doesn't. Doesn't keep working in a shut down that is. 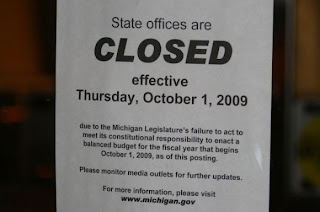 They can agree to spend billions on the unlawful invasion of Iraq based on a lie and they can spend billions on the bail out the banks scam but God help Obama if he dares spend money on health care. Those selfish conflict of interest politicians will voter no and rather shut down the government. Go figure.

However, part of the controversy appears to be over the use of tax dollars to fund abortions.