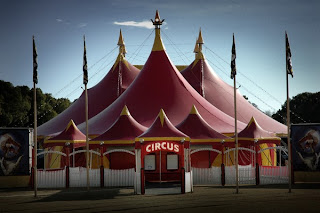 Michael Smyth from the Vancouver Province ran a synopsis of the week of Election campaigning as a week of shock and awe. We were shocked with revealing scandals and in awe with too good to be true promises.

He pointed out that many of us are having a hard time doing the math with all these election promises. "Yes, folks, you can have it all in this magical land we call Canada: lower taxes, more services and no nasty deficit hangover when the party's over. If only working out your family budget at the kitchen table were this easy."

I'm not sure what his hard on for Jack Layton is about other than according to his article Jack Layton is gaining votes at the expense of the Conservatives. Perhaps he just wants to be equally critical of everyone to be fair. Yet to be fair, when Jack Layton says he will hire more doctors and nurses to staff our hospital emergency rooms I believe him.

I did believe Harper when he said he wouldn't tax income trust and create an elected senate. Only he broke his word so I don't trust him any more. Saying that Layton will never become Premier so he will never have to fulfill any of his election promises is unfair. He's the only one we haven't given a chance to betray our trust yet.

In all fairness I'd have to admit that it was Darren Entwistle that caused Harper to turn face on the not taxing income trusts promise. He was going to turn TELUS into an Income Trust to avoid paying corporate tax. Letting Entwistle do that would have see the government lose a lot of revenue. Evey major corporation would followed suit. His hands were tied. Yet everyone knew Entwistle was going to do that. It was public knowledge so I don't understand why Harper made that promise knowing Enwistle's intent.

Michael Smyth pointed out that Stephen Harper's senior aid, Bruce Carson, was the subject of some socking revelations. "The Bruce Carson story just keeps getting worse. The fraud convictions. The escort agencies. The money laundering. How the heck did a guy with a rap sheet longer than the Rideau Canal end up as one of the prime minister's top men in Ottawa?"

The network revealed this week that before Carson proposed to Michele McPherson, (the 22 year old escort he was caught funneling government contract funds to) he was involved with another prostitute, Barbara Lynn Khan, a woman who was convicted and served time in the U.S. for money laundering after authorities alleged she ran a prostitution ring.

Smyth cites the event this week where Harper's aid kicked out two university students because one of them posted a picture of herself on facebook with Michael Ignatieff. Like how did those stalkers know she posted that picture on facebook. That is really creepy. And so what? People from other political parties are allowed to come and hear other candidates speak. Only not in Harper's world. Or at least in his plastic press bubble where his people still pick who asks what questions when. No wonder they don't want the Green Party at the debate. They might ask Harper to explain Jim Flaherty's intervention on Brian Mulroney's behalf putting pressure on the CIBC to settle with Barrick Gold. Like that's not conflicted.

Michael Smyth reminded us of that incident where Chretien was wading through a crowd of protesters and was caught grabbing one by the throat. Those were the days. That kind of thing just wouldn't happen in Harper's bubble.

Smyth also cited how Ignatieff fired candidate Andre Forbes this week, when it was discovered he was a whiterights advocate who once called aboriginals lazy "featherheads." Ignatieff "had been on a bit of roll up till then. This week's Momentum Meter shows him stuck in neutral." That former judge's comments about rape was just bizarre.

As much as I oppose Ignatieff's position on torture, I really object to the political circus degenerating into a survivor play by play drama of it's all about me. Survivor is all about lies, secret deals and promoting one person above the others. Life on the other hand is all about being honest, serving others and sacrificing for the greater good.

The underlining point missing in this weeks election circus show was highlighted by Dan Gardner in his article Voters should consider Harper's contempt.

"The status quo is just not tenable, for anybody," says Peter Russell, professor emeritus at the University of Toronto and one of the country's most respected political scientists. But a Conservative majority would be worse.

"It would send a bad message about parliamentary democracy if a government brought down for contempt, very serious contempt, on the finding of a Speaker, is rewarded with a majority. I think it would encourage Mr. Harper and maybe those after him to be contemptuous of Parliament. And then I think we're in real trouble."

It's easy to forget that, in the mad rush of events leading up to the election call and the noise that followed, Stephen Harper's government was found to be in contempt of Parliament -by vote in the House of Commons -for refusing to disclose the cost of several items on its agenda. It's what brought down the government and you might say it's what this election is about.

Not that anyone would know that listening to the prime minister. Speaking at Rideau Hall after asking the governor-general to call an election, Harper said nothing about the contempt verdict. It was a fittingly contemptuous response, as all his comments on the matter have been.

Another good point was raised by a letter sent in to the Province entitled Harper's insult. "To hear Stephen Harper talk, our democracy and economy is so fragile, that if we don't give him a majority government, the dreaded socialists and separatists will form a coalition with Michael Ignatieff and ruin the country.

This kind of arrogance and fear mongering is insulting to all Canadians and has no place in our democracy."