Elizabeth May wrongfully kicked out of Debate 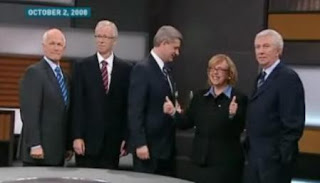 I'm not sure why Elizabeth May was allowed to participate in the last leadership debate and why she isn't allowed to participate in this one. I know they said it's because the Green Party doesn't hold any seats in parliament yet but why did they let her in the last one? She did very well. To ban her from the next one is censorship. Maybe she'll ask some of those secret questions Harper's aids don't allow on the script.

The Green party has the next largest parentage of the votes. Each election they get more. To allow her to participate in the last leadership debate but not this one is strange. The media said that if she was to participate some of the other parties might not. That was a rather bizarre threat? Who said they wouldn't show up if Elizabeth May was allowed. Was if Harpless? CTV claims Jack Layton was one. That's somewhat shocking. However, Elizabeth May claims that is untrue and that Layton and Ignatieff both support her being included.

If one of the other parties gave up their chance to participate because they were intimidated by her then so be it. Giving in to that kind of bullying is wrong. Harper's desire to exclude everyone except him and ?Ignatieff is stomach turning arrogance. He's just playing after he looked stupid for backing down after he challenged Ignatieff to a one on one debate. There are other choices in this election than Liberal or Neocon.

If you look at the table Votes Won: 2008 v. 2006 between the 2006 election and the 2008 election each of the four main political parties lost votes. The Green Party was the only party that increased votes. Looks like someone is afraid of her. That's why they don't want to let her participate in the debate. 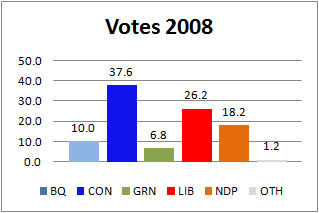