The Sixth Family and the Hells Angels 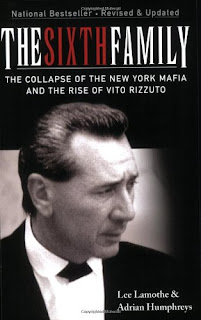 In a book about Vito Rizzuto's connections to the Hells Angels we read: As the plans for moving the drugs unfolded, they revealed the seamless way the Sixth Family worked with both Colombian cocaine cartels and the Hells Angels Motorcycle club.

On August 17 1994 the ship loaded with 558 kilograms of cocaine was met off the coast of Columbia by Norman Rosenblum, a wealthy and enthusiastic businessman from Vancouver. (page 255)

The freighter the headed north, stopping first in Miami, then making it's way along Canada's eastern seaboard and down the St Lawrence seaway to Montreal. Once it arrived at the Port of Montreal, the drugs were supposed to be transshipped to England. In London, two Quebec members of the Hells Angels, Pierre Rodrigue and David Rouleau, waited to collect the load for distribution in Europe.

Rosenblum told an undercover operator that he was a drug importation coordinator -- court documents say he reported directly to Montreal drug-trafficker Luis Cantieri, whom the Montreal Gazette described as "one of the kingpins of a drug network, with connections to Mafia bosses Vito Rizzuto and Frank Cotroni." Rosenblum, who was arrested with 40 others, was sentenced to 13 years in prison for his role in the drug and money-laundering scheme.